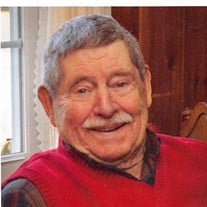 Hampton Falls – George F. Merrill, 84, of Hampton Falls passed away on Tuesday, November 8, 2016 at Clipper Harbor in Portsmouth after a lengthy illness. He was born in Newburyport, MA, on July 26, 1932, the youngest of five children to the late Russell, Sr. and Elizabeth (Cutts) Merrill. A life-long resident of Hampton Falls, George graduated from Hampton Academy in 1950 and went on to serve in the Air National Guard during the Korean War. George was employed for many years at the Morley Company and Diesel Equipment. A civic minded citizen, he was a charter member of the Hampton Falls Volunteer Fire Department and served on many town committees and boards. Most of all George was a dedicated family who always put his family first. He loved the outdoors and enjoyed many activities including; boating on the ocean, the salt marshes and waterways in Maine; hunting and fishing; and snowmobiling. George had a talent for working on small engines and one of his most-gratifying accomplishments was building a Model T touring car from scratch. George is survived by his wife of 58 years, Louise (Ludgate) Merrill; son Russell Merrill and his wife Jayne of Salisbury, MA; daughter Ann Merrill and her husband Daniel Jurgens of Edina, MN; daughter-in-law Elizabeth Merrill of Hampton Falls; grandchildren, Patrick, Elise and Mitchell Merrill, Seth and Quinn Jurgens, and Levi, Hayley and Abby Merrill and many nieces and nephews. In addition to his parents he was predeceased by his son Christopher, brother Russell, Jr. “Punkie” and sisters, Caroline Trovato, Marjorie Davies and Cynthia Trumbull. The Merrill family would like to offer a special thanks to all the staff at Clipper Harbor for the extraordinary care they provided George during this difficult time. Services will be held at 11:00 AM on Saturday, November 12, 2016 in the Remick & Gendron Funeral Home-Crematory, 811 Lafayette Road, Hampton. Burial will follow in the New Brookside Cemetery, Hampton Falls. Relatives and friends are respectfully invited. Family flowers only, memorial donations may be made to the Seacoast Youth Services, 867 Lafayette Road, Seabrook, NH 03874.

Hampton Falls &#8211; George F. Merrill, 84, of Hampton Falls passed away on Tuesday, November 8, 2016 at Clipper Harbor in Portsmouth after a lengthy illness. He was born in Newburyport, MA, on July 26, 1932, the youngest of five children... View Obituary & Service Information

The family of George F. Merrill created this Life Tributes page to make it easy to share your memories.