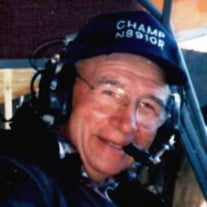 North Hampton - George O. Olson, Jr., 87, passed away on September 4, 2019 at The Edgewood Centre, Portsmouth. He was born in Kittery, Maine on November 29, 1931, the son of the late George O. Olson, Sr. and Mary Belle (Fernald) Cheney. Raised in Portsmouth, Newington and Rye, he was a 1952 graduate of Hampton Academy and High School. After graduation, he enlisted in the U.S. Air Force, serving 20 years in the United States, the Arctic, Europe, the Pacific and Southeast Asia as a maintenance supervisor and crew chief for various aircraft. After retirement in 1972, he worked in maintenance at the Marston School in Hampton. He also operated a small engine repair shop and was known as “The Lawnmower Guy.” He was often seen working around town plowing, mowing or tilling on his John Deere tractor. Pursuing his childhood interest in aviation, he became a private pilot in civilian life. He bought, restored and sold several small aircraft and flew into his early 80s. Sharing his enthusiasm for flight, he was always too eager to mentor a young pilot-to-be at Hampton Airfield. He is survived by his son, Gary, of North Hampton, his sister Jeanette Plimpton and husband Bernard of North Conway, several nieces, nephews and cousins, and his beloved rescue dog Beth. Besides his parents, he was predeceased by his wife of 60 years, Jane Moulton Olson, a brother Robert Leroy Olson, and an infant sister Joan. George's family would like to thank the staff of Martin's Point, Healthcare, Appledore Medical Group, Amedisys, Senior Helpers, Beacon Hospice, and The Edgewood Centre. A graveside service will be held at 1:00 PM Sunday, September 22, 2019 at Center Cemetery, Post Road, North Hampton followed by a celebration of life at The Victoria Inn, 430 High Street, Hampton. Relatives and friends are respectfully invited. In lieu of flowers, you may make a donation benefiting hospice to The Amedisys Foundation or to the New Hampshire SPCA Arrangements are by the Remick & Gendron Funeral Home-Crematory, Hampton.

The family of George O. Olson, Jr. created this Life Tributes page to make it easy to share your memories.