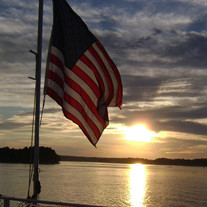 Hampton – George L. Paul, 86, of Hampton, died Tuesday, June 7, 2016 at his home after a lengthy illness with his loving wife by his side. He was born August 22, 1929 in East Parsonsfield, ME a son of the late Rev. George H. and Nellie (Simmons) Paul. Mr. Paul attended his early education to grade four in England, and to the eighth grade in Maine. He graduated from Hampton Academy in 1947 and from Plymouth State College in 1961. He was a veteran of the Korean War serving aboard the USS Donner LSD 20 with the US Navy. Mr. Paul taught business education at Exeter High School for 9 years and at Winnacunnet High School for 17 years. He also taught summers at Phillips Exeter Academy. In his earlier years he enjoyed playing baseball in an adult league as a pitcher. He was an avid Red Sox fan, enjoyed golfing and model railroading. After his retirement he enjoyed over 20 years of camping at Sea-Vu Campground in Wells, ME. He shared 61 years of marriage with his wife, Frances M. (Purington) Paul. In addition to his wife, family members include two sons, Daniel Paul and his wife Suzanne of Somersworth, David Paul of Hampton, four grandchildren, Samantha Bowley, Jacob and Amanda Paul, Peggy Cook, two great grandchildren, Madison Bowley and William Bowley, IV, his brother, C. Raymond Paul and his wife Betsy of Hampton, sisters in law, Marian Lamie and June Bennett, nieces and nephews. The family would like to thank Rockingham VNA & Hospice for their special care given to Mr. Paul. Graveside services will be held at 11 A.M. Friday, June 10, 2016 in the High Street Cemetery, Hampton. Relatives and friends are respectfully invited. In lieu of flowers, donations may be made to Rockingham VNA & Hospice, c/o Community Relations; Attn: Vivian Brown, Exeter Hospital, 5 Alumni Drive, Exeter, NH 03833 https://www.exeterhospital.com or to the New Hampshire S.P.C.A. P.O. Box 196, Stratham, NH 03885 www.nhspca.org/donate-2 . Arrangements are by the Remick & Gendron Funeral Home-Crematory, Hampton.

The family of George L. Paul created this Life Tributes page to make it easy to share your memories.