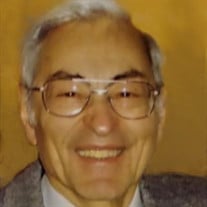 Portsmouth - George Peter Scouras, 89, of Portsmouth, passed away September 3, 2020. Born and raised in Peabody, MA, the second son to Peter and Dimitra (Panteloglou), he was a kind, thoughtful, generous, and loving man. During his high school years, he was on the baseball and track teams and was a member of the civics club. He and his friends spent their free time weightlifting and honing their hand balancing skills. His career ambition was to become an engineer, a goal he achieved after graduating from Northeastern University in 1955 with a Bachelor’s in mechanical engineering. Throughout college, he continued to remain active with weightlifting and was a member of Society of Manufacturing Engineers as well as ROTC. After graduation, he served in the Army and earned an expert marksman badge, an especially notable achievement for someone left-handed. He served in the Army Reserve, earning the rank of Captain, and received an honorable discharge. He worked as a mechanical engineer at Portsmouth Naval Shipyard in the nuclear engineering department and retired after 37 years. He had a deep appreciation for music and poetry. George especially loved solving problems, and in his eyes, no problem was ever too challenging. Whether asked for help from family, work, or friends, George could consistently be counted on to willingly oblige, always with a smile and followed by the words “No problem.” He was a member of St. Nicholas Greek Orthodox church, and in his earlier years, actively served on the church council. His greatest love was his family and friends, who will dearly miss him. He is survived by his wife, Becky, of 58 years, and his three children: Demi, Catherine, and Greg, grandson, Jared, brother, Charles P. Scouras, brother in-law, Charlie A. Scontras, sister-in-law, Sophie (Peter) Scontras, and many nieces and nephews. In addition to his parents, he is predeceased by brother-in-law, Peter A. Scontras, and sisters-in-law: Helen Scouras, Joanne Scontras, and Theresa Sudal. The family sincerely thanks Beacon Healthcare and Beacon Hospice of Portsmouth for the support, professionalism, and comfort their team provided to George and family. A small private service was held in Biddeford, ME. Arrangements were made with the assistance of Remick & Gendron Funeral Home-Crematory, Hampton.

Portsmouth - George Peter Scouras, 89, of Portsmouth, passed away September 3, 2020. Born and raised in Peabody, MA, the second son to Peter and Dimitra (Panteloglou), he was a kind, thoughtful, generous, and loving man. During his high school... View Obituary & Service Information

The family of George P. Scouras created this Life Tributes page to make it easy to share your memories.

Send flowers to the Scouras family.