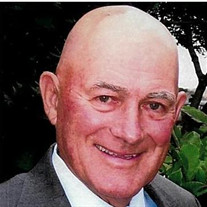 Seabrook – George W. Staples, 89, of Seabrook died Friday December 14, 2018 at his home with family by his side. He was born in Seabrook January 17, 1929 the son of the late Ralph J. and M. Elizabeth (Sanborn) Staples. Mr. Staples was a graduate of Dover Trade School and Essex Agricultural School. He was a Korean War veteran serving with the US Army. George was the founder and owner of Staples Mobile Home Park in Seabrook for over 50 years and took great pride in the operation of the park. In his earlier years he was employed by the Harvard University Observatory working on the Hubbell Telescope. He travelled extensively, collected antique cars, coins and enjoyed bicycling, Dominos, skating and skiing. He wintered in Englewood, FL. He leaves his wife, Patricia M. (Dow) Staples, four children, Barbara J. Brinkman and her husband Edward of Hampton, Mary E. Fullerton and her husband Bill of Casco, ME, Lee-Anne Gerrish and George R. Staples both of Seabrook, numerous grandchildren, great grandchildren, great great grandchildren, cousins and five stepchildren. In addition to his parents, he was predeceased by three grandchildren, twins, Joshua and Jeremy Brinkman, George R. Staples, Jr. and great grandchildren, Elizabeth and Ronald Antanavitch. Visiting hours will be from 5-8 P.M. Tuesday, December 18, 2018 at the Remick & Gendron Funeral Home-Crematory, 811 Lafayette Road, Hampton. Services will be held at 11 AM Wednesday, December 19, 2018 in the funeral home. Burial will follow in the Hillside Cemetery, Seabrook. Relatives and friends are respectfully invited. In lieu of flowers, donations may be made to Rockingham VNA &Hospice, 137 Epping Road, Exeter, NH 03833.

The family of George W. Staples created this Life Tributes page to make it easy to share your memories.

Send flowers to the Staples family.