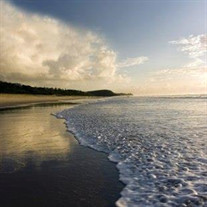 Hampton – Georgina “Ina” Bambury, 86, a Hampton resident for the past 26 years, passed away peacefully on Friday, June 7, 2019. She was born in Boston, MA on October 27, 1932 the daughter of the late James M. and Annie (McAllister) Smith. Raised in Somerville, MA she graduated from Somerville High School, where she met her future husband of 64 years Warren Bambury at a church youth group, whom she married after he returned from the Korean War while proudly serving in the Army. She first worked for Middlesex Federal Savings in Somerville as a teller before dedicating her life to raising her family. Later in life after her children were grown she went back to work as an administrative assistant for a number of years at Tufts University and also worked at her son’s appraisal company over the years. Ina was active in the First Church Somerville UCC and First Congregational Church of Hampton and was a member of the Odds and Ends Circle in Somerville and the Women’s Guild in Hampton. She also served as a board member for the Duhamel Education Initiative. She was an avid reader who enjoyed baking and crossword puzzles, but her greatest joy was her family, whom she lovingly cared for and cherished with all her heart. In addition to her loving husband Warren of Hampton, surviving family members include her children, Linda Greenfield and her husband Steve of Salem, Alison Bell and her husband Dave of Wilmington, MA and Andy Bambury and his wife Mary of Andover, MA; grandchildren, who knew her as “Grammie”, Jeff Greenfield, Tom Greenfield and his wife Julie, Stephanie Wojcik and her husband Chris, Amanda Payette and her husband Jamie, Greg Bell, Dan Bell, Elizabeth Bambury and Stephen Bambury; great granddaughter, Juliette Payette; daughter in law, Karen Bambury and several nieces and nephews. In addition to her parents, she was predeceased by her cherished son, Warren “Ren” Bambury Jr. and brother, John Smith. Ina was an amazing role model and loving mother and grandmother to her children, grandchildren and their spouses. She will be remembered as a caring, loving woman who always put her family, friends, and church first and will be forever loved and missed by all who were lucky to have known her. At the family’s request all services will be private. In lieu of flowers, donations may be made to the American Diabetes Association , P.O. Box 15829, Arlington, VA 22215, the Duhamel Education Initiative , PO Box 440113, Somerville, MA 02144, God’s Baby Closet of First Congregational Church, 127 Winnacunnet Road, Hampton, NH 03842 or the Melanoma Research Foundation , P.O. Box 759329, Baltimore, MD 21275-9329.

The family of Georgina "Ina" Bambury created this Life Tributes page to make it easy to share your memories.

Send flowers to the Bambury family.