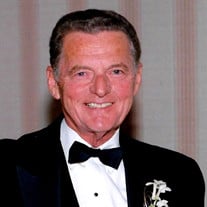 Rye – Gerald J. Clinton, Sr., 92, formerly of Rye, died Tuesday, December 12, 2017 after a period of failing health. He was born in Boston, MA July 6, 1925 a son of the late John and Edith (Jule) Clinton and was a graduate of Mechanic Arts High School in Boston with the class of 1943. A veteran of WW II and Korea he served 32 years with the US Army retiring in 1976 with the rank of Major. He was the recipient of the Bronze Star and served as a senior paratrooper. After his retirement from the Army he was self employed in real estate investment. He was a former communicant of St. James Church in Portsmouth, a member of Knight of Columbus Council 140 and St. Mary’s Assembly 4th degree and VFW Post 168 all of Portsmouth. He was the husband of the late Barbara (Burke) Clinton who predeceased him in 2012. Family members include his daughter, Carma Clinton Makarewicz and her husband Steven of Tyngsborough, MA, two sons, Gerald J. Clinton, Jr. and his wife Mercedes of Rye, Andrew B. Clinton and his wife Lori of Long Beach, CA, five grandchildren, Jessica, Mark, Dina, Jonathan and Lauren, and three great grandchildren. He was predeceased by his sister, Ruth McElroy. A vising hour will be held from 9 - 10 A.M. Saturday, December 16, 2017 at the Remick & Gendron Funeral Home-Crematory, 811 Lafayette Road, Hampton followed by a mass of Christian burial at 10:30 A.M.at St. Theresa Church, 815 Central Road, Rye Beach. Burial will be in Central Cemetery, Rye. Relatives and friends are respectfully invited. The family requests that in lieu of flowers donations be made to New Generation 568 Portsmouth Avenue Greenland, NH 03840.

The family of Gerald J. Clinton, Sr. created this Life Tributes page to make it easy to share your memories.