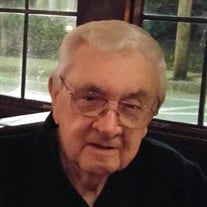 Hampton – Gerald M. ‘Jerry’ Dignam, 86, a longtime resident of Hampton, passed away peacefully on Friday, July 7, 2017 in his beloved town of Hampton, surrounded by family. He was born September 17, 1930 in Bradford, England, son of the late Martin and Beatrice (Bracewell) Dignam. Raised in Yonkers, NY where he met his wife of 64 years Margaret ‘Marge’ (Cocciardi) Dignam. Jerry graduated from Saunders Trade & Technical School, Class of 1948. Following graduation he proudly served in the United States Army as a member of the Ordinance Department during the Korean War. Returning home from the Army, he first worked at Otis Elevator as an engineer, which led to a long career as a radar and missile guidance systems engineer for various contractors including Raytheon in locations all over the United States. He was very proud to have been part of the team that worked on the Saturn rocket, part of the Apollo program that helped propel man to space and the moon. Mr. Dignam was very active in his community and was a member of American Legion Post 35, the Royal Society Bridge Club, Co-Chairman of the Hampton 350th Parade, former Chair of Hampton Beach Seafood Festival, former Chair of Hampton Town Democratic Committee, former President of Hampton Area Lions Club, and President of the former Exeter Hampton Elks Lodge, a former Knights of Columbus, and he emceed the Hampton Christmas Parade for years. Jerry volunteered for many organizations in support of his community and being the larger than life and colorful character he was, acted as master of ceremonies for countless fundraisers and events. Jerry enjoyed cooking, singing, politics, woodworking, traveling, a good laugh, and swimming in the ocean especially at North Beach, was a voracious reader, but most of all he loved spending time with his family and friends. In addition to his wife Marge Dignam of Hampton he is survived by his children, Michael Dignam of Hampton, Gloria Dion and her husband Jack of Hampton, William Dignam and his wife Kelly of York, ME, Dianne Frechette and her husband Allen of Hampton, Pamela Bates and her husband Garrett of Stratham; grandchildren, Jeffrey Dion and his partner Judy Boyd, Nicole Dion and her partner Jesse Simons, Matthew Dion, Caitlin Smith and her husband Jon, Joseph Dignam, Madelyn Dignam, Alaina Frechette and her partner Mike Emond; Patrick Frechette and his wife Ashley; great grandchildren, Cayden, Sophia, Olivia, Stella, and Sadie; and granddogs Chance, Ollie and Willie as well as his Sister in Law, Catherine O’Leary, Brother in Law Bobby Viggliotti and his wife Joan, Brother in Law Whitey Melvin, cousin Glenys Tencer and many nieces and nephews. Visiting hours will be held from 4 to 6 pm on Wednesday, July 12, 2017 in the Remick & Gendron Funeral Home – Crematory, 811 Lafayette Rd., Hampton. A prayer service will immediately follow the visitation starting at 6 pm in the funeral home. Burial will be private. Donations in Jerry’s memory can be made to Future In Sight, 25 Walker St, Concord, NH 03301 or the New Hampshire SPCA, PO Box 196, Stratham, NH 03885.

The family of Gerald M. "Jerry" Dignam created this Life Tributes page to make it easy to share your memories.

Send flowers to the Dignam family.