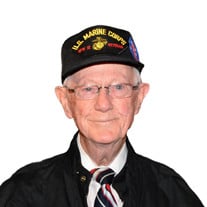 Hampton – Gerald A. “Jerry” McConnell, 92, of Hampton, died Sunday, February 19, 2017 at the Merrimack Valley Hospice House in Haverhill, Mass surrounded by his loved ones. He was born in Altoona, PA May 27, 1924 the fifth son of the late John and Grace (Fletcher) McConnell. He left Altoona High School early in his senior year to enlist in the US Marine Corps on January 5, 1942 after Japanese had bombed Pearl Harbor on December 7, 1941. Jerry participated in the landing against the Japanese Army on Guadalcanal, Solomon Islands, South Pacific from August 7, 1942 until December 7, 1942 before being evacuated to Brisbane and Melbourne, Australia. He left Australia with recurring malaria via a hospital ship in September of 1943 and was transported back to Long Beach Naval Hospital in California and then on to St. Albans Naval Hospital in Long Island, NY. He was awarded the Presidential Unit Citation with bronze star for second award combat actions while on Guadalcanal. Jerry spent ten years in the Marine Corps and was honorably discharged as a Master Sergeant to attend Columbia University, New York City in 1952. He enlisted in the US Air Force in February of 1955 and completed his enlistment with the rank of Tech Sergeant in February of 1965. He shared 72 years of marriage with his wife, Betty P. (Hamilton) McConnell whom he married in 1945. They moved to Hampton in 1957 where he began serving the community in many ways. He served on the Planning Board, was representative to the Rockingham County Planning Commission, vice president and life member of the Hampton Historical Society, chairman of the Bicentennial Commission of the US Constitution, member of the Hampton History Book Committee, and served as chairman on the Hampton 350th Anniversary Celebration Committee. Jerry was also a member of the Hampton Rotary Club, and was chairman of the Guadalcanal project for nearly 10 years, he was advocate and advisor to local seniors’ club on seniors / town matters, served as assistant town moderator, served on the Hampton Library Board of Trustees for 10 years, was a member of Hampton’s American Legion Post 35, member of Hampton Municipal Records Committee, Solid Waste User Fee Committee, founder, organizer and Charter Chairman of Crime Line for the Hamptons from 1994-2001. He was chairman for campaign committees for the election of Selectmen Rice, Warburton, Sullivan and Workman, chairman and organizer of the Seniors Appreciation Days weekend, Senior Volunteer Advisor for the Sherriff’s Department for TRIAD/SALT Program, member of the Police Advisory Committee, Recreation Advisory Committee, Sandcastle Planning Committee, Hampton Co-chairman for Craig Benson for Governor, WHS Outreach Committee for Expansion, founded, organized and was first president of Friends of Winnacunnet Foundation, columnist for Hampton Union, Atlantic News, Seacoast Scene, Canada Free Press Internet News Service, Sarasota Florida Internet News Service and was the author of two published books and a book of WW II experiences published on the internet. Family members include his wife, Betty P. McConnell of Hampton, nieces and nephews. Visiting hours will be from 1-3 PM Sunday, February 26, 2017 at the Remick & Gendron Funeral Home-Crematory, 811 Lafayette Road, Hampton followed by a brief prayer service at 3 P.M.. In lieu of flowers, donations may be made to the NH S.P.C.A. P.O. Box 196, Stratham, NH 03885

The family of Gerald A. McConnell created this Life Tributes page to make it easy to share your memories.

Send flowers to the McConnell family.