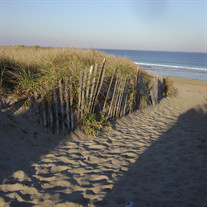 Rye Beach, NH - Geraldine (Geri) Spears of Rye Beach and formerly of Naples, FL passed away on April 8th, 2018 after an extended illness with her beloved husband, sister and dog by her side. She was born in Providence, RI on June 18, 1945 to the late Dorothy and Ralph Miller. Geri met Peter in Rhode Island and married in 1981. They relocated numerous times with Peter’s career and Geri, a talented interior designer, worked for 18 years for Ethan Allen Interiors in three states, including the store in Portsmouth. During her tenure, she achieved National Recognition at the Ethan Allen National Conference four of those years. She later created her own company, Geri Spears Interiors. Geri was also an avid photographer with a remarkable eye. The swans on Eel Pond and the ever-changing light on the Abenaqui Country Club pond in front of her home fascinated her. Geri’s love for Hawaii took her and Peter there many times over the years. In 2004, they acquired a home in Old Naples, FL and spent the long New England Winters in the sun. Geri delighted in the numerous art fairs, parades and nightlife on 5th Avenue, taunting her buddies back in NH with weather reports. Geri is survived by her husband of 37 years, Peter Spears; her children, Alan Lombardi and partner Lynn Capoverde of Sunrise, FL and Bradford Lombardi and wife Andrea of Hutchinson Island, FL; a grandson, Anthony Lombardi and a great grandson, Kaden Lombardi of Port Orange, FL. She leaves a dearly loved sister, Karen and brother in law, Geary Famiano of Naples, FL. She also shared a special relationship with her niece, Sherry Lombardi and great niece, Isabella Famiano. Geri made friends wherever she went, and they were numerous. The consummate host, Geri entertained her friends, neighbors and collegues at any and every holiday. She was incredibly thoughtful, never missing sending birthday and holiday cards. She will be forever missed by all who love her. The family would like to recognize the healthcare organizations that provided her professional and compassionate care in the late stages of her disease, including: Home Instead Senior Care, EvoLve at Rye, Exeter Hospital, Bellamy Fields of Dover and the Rockingham VNA & Hospice. Geri will be interred at the historic St. Andrews-By-The-Sea Chapel at a private family ceremony in the late spring and a celebration of life will be held at the family home this summer. In lieu of flowers, the family requests that donations be made to Save the Children ,501 Kings Highway East, Suite 400, Fairfield, CT 06825.

Rye Beach, NH - Geraldine (Geri) Spears of Rye Beach and formerly of Naples, FL passed away on April 8th, 2018 after an extended illness with her beloved husband, sister and dog by her side. She was born in Providence, RI on June 18, 1945 to... View Obituary & Service Information

The family of Geraldine M. "Geri" Spears created this Life Tributes page to make it easy to share your memories.

Send flowers to the Spears family.