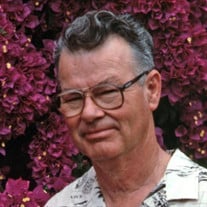 Hampton, NH - Gerard K. “Jerry” Green, 88, of Hampton and a former longtime resident of Andover, MA and Rye, NH, passed away peacefully on Sunday, September 13, 2020. Gerard was born in Lowell, Mass., on May 6, 1932, the son of the late Francis C. and Grace M. Green. Jerry graduated from Lowell Technological Institute in 1956 with his Bachelor’s Degree in Textile Manufacturing, Sales and Management and entered the U.S. Air Force after graduation. The following year he married his sweetheart Genevieve “GeGe” Hartigan. After raising their five children and retiring from a career in sales from Baldwin Steel, Ohio, Jerry and GeGe enjoyed travelling the world. Whether on their sailboat to Florida or through the inlets of Alaska, by cruise ship along the Amazon, through the Panama Canal and South America or walking the Great Wall of China, they enjoyed each other’s company immensely. Jerry was also a member of the Portsmouth Yacht Club where he served as Commodore and where he and GeGe made many new friends. They enjoyed the many club activities, especially sailing and travelling with fellow members. Jerry was predeceased by his wife Genevieve in May 2019, his daughter, Kathleen A. Smith in 2015 and his son Donald G. Green in 1992. He is survived by his daughter Genevieve L. Finnerty of Dover, NH, his sons, Daniel C. Green and his wife Maureen of Windham, ME and Stephen K. Green of Lee, NH, his nine grandchildren and six great-grandchildren. Family and friends may visit from 10 to 11 am on Friday, September 18, 2020 in the Remick & Gendron Funeral Home – Crematory, 811 Lafayette Road, Hampton, NH. A Mass of Christian Burial will be celebrated at 11:30 am at Saint Theresa’s Parish Church, 815 Central Road, Rye Beach, NH. The burial will be at 2 pm in Saint Mary’s Immaculate Conception Cemetery, Lawrence, MA. The family request that flowers please be omitted. If desired, donations may be made to Crossroads House, 600 Lafayette Road, Portsmouth, NH 03801.

The family of Gerard K. Green created this Life Tributes page to make it easy to share your memories.

Send flowers to the Green family.