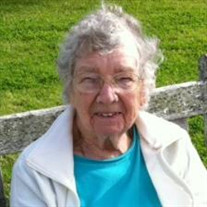 Portsmouth – Gertrude M. Carr, 98, of Portsmouth and a former longtime resident of Rye, passed away peacefully on Friday, March 17, 2017 at the Edgewood Centre in Portsmouth. She was born in Lowell, MA October 22, 1918 a daughter of the late George B. and Mae L. (Field) Fallon. Gertrude graduated from Lawrence High School with the class of 1936. She was a volunteer at the former Bon Secours Hospital in Methuen, MA for 12 years and served as a Camp Fire Girl Leader and Cub Scout Den Mother. In 1976 she moved to Rye from Andover, MA. She was a communicant of St. Theresa Church, Rye Beach and served as a Eucharistic minister and religious education teacher. She served the Town of Rye as a volunteer EMT with the Rye Ambulance Corps. Gertrude enjoyed taking many art courses and workshops and was a former member of the Seacoast Art Association. She shared 64 years of marriage with her late husband Sherman E. Carr, who died in 2004. Family members include three daughters, Mary Lou Carr of Rye, Jane E. Sullivan and her husband Raymond of Dunstable, MA, Elizabeth A. Haskell and her husband Roy of Durham,CT, and daughter-in-law Barbara Carr of Londonderry. She also leaves her 15 grandchildren, 17 great grandchildren, 2 great, great grandchildren, and her two sisters, Mildred F. Caliri of Lawrence, MA and Miriam Clisbee of Groveland, MA. In addition to her husband, she was predeceased by two sons, Robert A. Carr who died in 2001 and Thomas S. Carr who died in 2002 and her brother George B. Fallon Jr who died in 2004. Gertrude's family would like to express its deep appreciation and thanks to the wonderful caregivers, staff, and administration of The Edgewood Centre for their kind and compassionate care. Visiting hours will be from 2 to 4 and 6 to 8 PM on Thursday, March 23, 2017 in the Remick & Gendron Funeral Home-Crematory, 811 Lafayette Road, Hampton. A mass of Christian burial will be celebrated at 10 AM on Friday, March 24, 2017 at the St. Theresa Parish Church, 815 Central Rd., Rye Beach. Burial will be in the Central Cemetery, Rye. Family and friends are respectfully invited. In lieu of flowers, donations in Gertrude's memory may be made to the Activity Department at The Edgewood Centre, 928 South ST., Portsmouth, NH 03801.

Portsmouth &#8211; Gertrude M. Carr, 98, of Portsmouth and a former longtime resident of Rye, passed away peacefully on Friday, March 17, 2017 at the Edgewood Centre in Portsmouth. She was born in Lowell, MA October 22, 1918 a daughter of the... View Obituary & Service Information

The family of Gertrude M. Carr created this Life Tributes page to make it easy to share your memories.

Portsmouth – Gertrude M. Carr, 98, of Portsmouth and a former...

Send flowers to the Carr family.