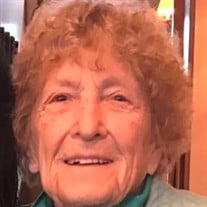 Wolfeboro – Gertrude Frances Hays, 94, of Wolfeboro, passed away peacefully at Portsmouth Regional Hospital on Thursday, August 8, 2019 after a sudden illness. Gertrude was born in North Andover, MA on January 8, 1925, a daughter of the late Roland and Della (Frost) Cook. Gertrude was raised in North Andover. Shortly after graduating from high school, she met and married her first husband, Elmer E. Fisher, Sr. Elmer was drafted into the US Marine Corps during WWII and after his service, the pair settled in Salem County, NJ. After many years of marriage, the couple divorced and she later married Alvin Hays and they moved to Florida where they lived for many years. After Alvin’s passing in 1988, Gertrude was faced with hurricane Andrew which she lost her home, she then relocated to Wolfeboro, NH to be near family where she has lived for the last 27 years. She was a very artistic woman with a passion for her arts and crafts. She spent her time making quilts, clothes and pillows for family and friends. Many years she sold her works at local craft fairs. While in Wolfeboro, Gertrude worked part time at Bailey’s Lake Motel. She was a friendly and personable lady; she made many close and dear friends during her time in Wolfeboro. Gertrude was a cancer survivor who raised money and walked in several cancer society walk-a-thons. She is survived by her sons, Elmer Fisher Jr and his wife, Kathy of Middletown, DE, John Fisher and his wife Patty and Peter Fisher and his wife Donna (deceased) all of Pittsgrove Township, NJ, and Michael Fisher and his wife Joy of Elmer, NJ and her daughter, Sandra Morgan and her husband Lou (deceased) of Franklinville, NJ. She also leaves her brother, Gardner Cook, of Chelmsford, MA, and her sister Carolyn Hazel and her husband, Maurice of Charlemont, MA. She had been blessed with 20 grandchildren, 32 great- grandchildren, and 4 great-great grandchildren. She is also survived by 3 nephews and 3 nieces. In addition to her parents and her husbands, Gertrude was predeceased by her daughter, Dorothy Frank, her son, Roland A. Fisher, her grandsons, Guy and Brady Ivers, Kenny Fisher and her granddaughter Dawn Fisher. Services will be private. In lieu of flowers, memorial donations may be made to the American Cancer Society .

Wolfeboro &#8211; Gertrude Frances Hays, 94, of Wolfeboro, passed away peacefully at Portsmouth Regional Hospital on Thursday, August 8, 2019 after a sudden illness. Gertrude was born in North Andover, MA on January 8, 1925, a daughter of the... View Obituary & Service Information

The family of Gertrude F. Hays created this Life Tributes page to make it easy to share your memories.

Send flowers to the Hays family.