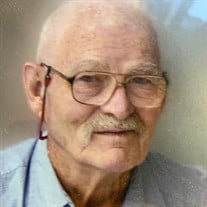 Hampton - Glen Webb, 97, a longtime resident of Hampton, peacefully passed away on June 9, 2019 at the Hyder Hospice House in Dover. Glen was born in Guthrie, OK on August 24, 1921 to the late Houston Jefferson and Myrtle (Friend) Webb. His mother had passed away when he was only five. Glen, with his father and siblings, migrated to California during the Great Depression and he went on to graduate from Santa Rosa High in Santa Rosa, CA. A WWII veteran, Glen served in the US Navy and after the war, Glen, his beloved wife, the late Lucille (Young) Webb, and their young family moved to Hampton. He worked for many years at the Portsmouth Naval Shipyard as an electrician and scheduler in the submarine division and retired in 1979. Events during his early years helped develop the man he became... a hardworking, caring, kind man who loved his family, working with his hands, gardening, traveling through the US and Canada, collecting coins and stamps, playing card games with friends, and doing Sudoku puzzles. For over 40 years he spent his summers in Nova Scotia, taking care of the family's home and property, passed down from Lucille's grandparents. Carpenter, mower of countless acres of grass and clearer of pastureland are just some of the things he did while there. His favorite activity in Nova Scotia, however, was replanting thousands of trees and then caring for them to replenish the forests after lumber mills had cleared the land. Family members who will dearly miss Glen include his children, Glen Mark Webb of Hampton, Sandra Hammon of Terrill, TX, Paula Noon of Newton, NH and Pamela Hanson of Tabernash, CO. He also leaves his grandchildren, Sara Hanson (Colorado), Erik Hanson (Tennessee), Anthony (Tony) Noon (Amesbury, MA), and Matthew Noon along with his wife, Heather (Manchester); his great grandchildren, Mollie and Maggie Noon (Manchester NH) and Nicole and Megan Hanson (Tennessee). Glen also has several nieces, nephews and cousins throughout the US. In addition to his parents and Lucille, his dear wife of 66 years who passed in 2010, Glen was predeceased by his five brothers and two sisters. A graveside service will be held at 11am on Thursday, June 20, 2019 in the High Street Cemetery, Hampton where Glen will be laid to rest beside his Lucille. In lieu of flowers, donations in his memory may be made to the Hyder House Hospice 285 County Farm Road, Dover, NH 03820, the New Hampshire Food Bank 700 East Industrial Park Drive, Manchester, NH 03109 or the New Hampshire SPCA PO Box 196, Stratham, NH 03885.

Hampton - Glen Webb, 97, a longtime resident of Hampton, peacefully passed away on June 9, 2019 at the Hyder Hospice House in Dover. Glen was born in Guthrie, OK on August 24, 1921 to the late Houston Jefferson and Myrtle (Friend) Webb. His... View Obituary & Service Information

The family of Glen Webb created this Life Tributes page to make it easy to share your memories.

Send flowers to the Webb family.