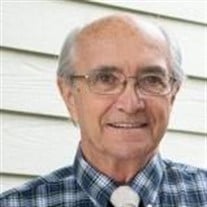 Ocala, FL - Glenn Elliott Randall, 71, currently of Ocala, FL, passed away on Friday, January 22, 2021. Glenn was born in Beverly, Massachusetts to Daniel and Bessie Randall. He had lived in Ocala since May of 2019, but he considered New Hampshire his home. He proudly served in the United States Coast Guard where he was assigned to the USCG Group Boston and served on the Coast Guard Cutter Bibb (WHEC31) and at the Gloucester, Massachusetts Search and Rescue Station. During boot camp he was chosen and was honored to serve as a Coast Guard representative for the Honor Guard at President Dwight D. Eisenhower's funeral. Glenn was a Master Mason and an active member of St. James Lodge No. 102 (Hampton, N.H.) as well as the William Whipple Military Lodge (Portsmouth, N.H.). Glenn also served as a volunteer staff member and guide for the William Pitt Tavern Masonic Museum at “Strawbery Banke” in Portsmouth, NH. He was a member of the USCGC Bibb Shipmates Association and belonged to the House of Gordon USA. Glenn was the founding member and captain of Drake’s Regiment, a Colonial Reenactment artillery unit out of Hampton, NH. Additionally, he was a member of the Pequawet Alliance, a French Canadian 1750’s militia reenactment group. Glenn Randall was an enthusiastic outdoorsman who enjoyed watching nature closely while hunting and fishing. He was also an avid surfer of New Hampshire’s coast. Often, he could be found with his long board surfing favorite spots beginning at the Wall at North Beach in Hampton, and along Jenness Beach in Rye. Glenn enjoyed all sports. He competed on the Beverly High School track and football teams during his teenage years in Beverly, Massachusetts. As a father, Glenn coached Little League in Barnstead, NH and was the Junior Varsity coach for the Pittsfield High School basketball team. Glenn grew up in the Baptist Church in Beverly, Massachusetts. He and his wife, Darlene Randall became members of the Hampton Falls First Baptist Church in Hampton Falls, New Hampshire. They currently attend Good Shepherd Presbyterian Church in Ocala. Survivors include his wife Darlene Randall, his son Jeffrey Randall, his daughters Jennifer Bouchard and Kimberly Provencher, his grandchildren (Jeff) Todd Randall, Colin Randall, Connor Randall, Reaghan Randall, (Jenn) Haley Morrill, Phillip Morrill, Kyle Vaughan, Christian Vaughan, (Kim) Cole Provencher and Kaylin Provencher, his great grandchild Emma Welsh, his sister Wendy Grindrod and his nephew Matthew Grindrod Services will be held at 11 AM on Saturday, August 28, 2021 at the Hampton Falls First Baptist Church, 3 Lincoln Avenue, Hampton Falls, NH. Coast Guard honors will be rendered at the church immediately following the service.

Ocala, FL - Glenn Elliott Randall, 71, currently of Ocala, FL, passed away on Friday, January 22, 2021. Glenn was born in Beverly, Massachusetts to Daniel and Bessie Randall. He had lived in Ocala since May of 2019, but he considered New Hampshire... View Obituary & Service Information

The family of Glenn E. Randall created this Life Tributes page to make it easy to share your memories.

Send flowers to the Randall family.