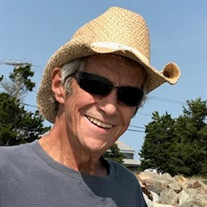 Hampton – Glenn S. Washburn, 69, of Hampton, former longtime resident of Amherst, MA, passed away peacefully on Saturday, February 27, 2021 at his home. He was born in Plymouth, MA on May 29, 1951 a son of the late Donald W. Washburn and Fay E. (Ritchie) Hunt. Raised in Wrentham, MA, he graduated from King Philip High School with the Class of 1969. Glenn was married to the love of his life for 40 years, Ellen Fagan of Hampton, NH. He is survived by daughters, Kara Washburn of Maynard, MA and Tracey Myers of Bellingham, MA; sisters, Donna Haggett of St. Petersburg, FL, Terri Smith of Lakeland, FL and Grace Boylan of Clinton, MA and 2 grandchildren. Glenn was a talented carpenter who loved working with his hands. He made his livelihood through carpentry and also used his skills in pursuit of his theatrical interests, building Broadway quality sets for plays. Glenn had a creative bent that showed in everything he did. He filled the role of Uncle Sam on July 4th at Rye Beach and Johnny Appleseed in Ellen’s classroom. A true Renaissance man, Glenn acted in plays, quoted Shakespeare and knew every player on his beloved Red Sox and Pats. He was equally at home at Fenway Park, where he saw Derek Lowe pitch a no-hitter in 2002, and on a dance floor with Kara and Ellen where he enjoyed ballroom, swing and tango. Glenn was at the top of his game at a stove or grill and his chocolate chip cookies were legendary. Glenn was an active member of Christ Community Church in Belchertown for many years, leading the youth group, and wrote and performed in many holiday productions. After his recent move to Hampton, Glenn enjoyed participating in services at New Frontiers Church in Portsmouth. A celebration of Glenn’s life will be held from 1 to 3 PM on Saturday, June 12, 2021 at Odiorne Point State Park, 570 Ocean Blvd., Rye, NH 03870. In lieu of flowers, donations may be made in Glenn’s memory to Christ Community Church in Belchertown, Massachusetts, or New Frontiers Church, Portsmouth, NH. “I said some words to the close and holy darkness…and then I slept.” A Child’s Christmas in Wales, Dylan Thomas.

The family of Glenn S. Washburn created this Life Tributes page to make it easy to share your memories.

Send flowers to the Washburn family.