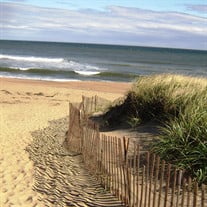 North Hampton – Gloria J. Hagerman, 87, of North Hampton, died Tuesday, June 20, 2017 at the Edgewood Centre in Portsmouth surrounded by her family. She was born in Linnius, ME March 18, 1930 a daughter of the late Lester and Josie (Smith) Eaton. Gloria graduated from Ricker Institute in Houlton, ME and later from beautician school. She moved to Hampton in 1964 coming from Presque Isle, ME and was employed by the Hampton school lunch program and later for the former USM Bailey Corporation. She was also employed at Clipper Harbor Nursing Home in Portsmouth and the former Sunbridge Nursing Home in Exeter. She was a member of the United Methodist Church and the Women’s Society of the church. She enjoyed knitting, quilting, reading and making cookies. Gloria leaves her daughters, Windy Hagerman of Hampton, Beverly Lane and her husband Richard of Barrington, her son, Donald Hagerman and his wife Sandra of Lunenburg, Mass., four grandchildren and seven great grandchildren. She was predeceased by her former husband, Donald E. Hagerman, her brother, Beverly Eaton and sister, Joyce Giggey. The family would like to thank the staff at both the Edgewood Centre and Constellation Hospice for the wonderful care our mother received. A special thank you goes out to all her friends that visited, brought meals and helped with errands to keep Gloria in her in her home for as long as she could. Services will be held at 11 A.M. Saturday, July 8, 2017 at the United Methodist Church, Hampton. Relatives and friends are respectfully invited. In lieu of flowers, donations may be made in her memory to the United Methodist Church, 525 Lafayette Road, Hampton, NH 03842 or to a charity of one’s choice. Assistance with the arrangements was by the Remick & Gendron Funeral Home-Crematory, Hampton.

North Hampton &#8211; Gloria J. Hagerman, 87, of North Hampton, died Tuesday, June 20, 2017 at the Edgewood Centre in Portsmouth surrounded by her family. She was born in Linnius, ME March 18, 1930 a daughter of the late Lester and Josie (Smith)... View Obituary & Service Information

The family of Gloria J. Hagerman created this Life Tributes page to make it easy to share your memories.

Send flowers to the Hagerman family.