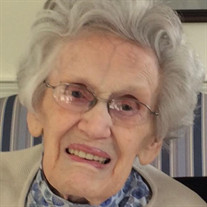 Rye – Gretta Mary Cleary, 96, died May 18, 2018, in Rye. She was born in Somerville, MA, April 2, 1922, and was the daughter of the late Joseph and Gretta (Madore) Leighton. She had a beloved sister, Geraldine, who died in 1992. Mrs. Cleary was accepted at the Vesper School of Art in Boston and proceeded to work as a colorist in a Boston photography studio. Her main hobbies were painting, writing poetry, and playing cards with family and friends. Gretta was the wife of the late Hugh J. Cleary who died in 1991. While originally residing in MA, they made Hampton, their home in 1959, where Gretta lived until moving to Webster at Rye in 2015. Raising a family was most important to Gretta and she loved spending time with her loved ones, especially her grandchildren and great-grandchildren. She was a member of The Church of Jesus Christ of Latter-day Saints in Exeter. Family members include her daughter, Kathleen Hoesly and her husband, Rick of Portsmouth, grandson Eric Harlow, his wife Mnisa and their children Connor, Tehya, Aspen, and Eric Chase of Austin, TX, grandson Ben Harlow, his wife Jayme and their children Joselyn Gretta, Hyrum Hugh, and Sarah of Phoenix, AZ, and Rebecca (Harlow) Costello, her husband Jeffrey and their children Roanan, Fiona, Bearic and Kayleigh of Memphis, TN. Visiting hours will be from 4 – 6 P.M. Friday, May 25, 2018, in the Remick & Gendron Funeral Home-Crematory, 811 Lafayette Road, Hampton. Services will be held at 11 A.M. on Saturday, May 26, 2018, at the funeral home. Burial will follow in the High Street Cemetery, Hampton.

The family of Gretta M. Cleary created this Life Tributes page to make it easy to share your memories.

Send flowers to the Cleary family.