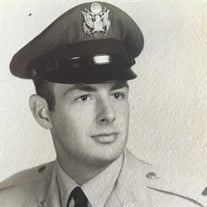 Rye, NH – Guy Karrer Buesing, 77, of Rye, died peacefully surrounded by family on Sunday, October 11, 2015 at Portsmouth Regional Hospital. He was born in Caldwell, NJ on August 20, 1938 and raised by three wonderful parents, his father Charles Buesing his mother Virginia Karrer Buesing, and Ann Lipman Buesing, his father’s second wife, who raised Guy as her son after his mother passed away when he was 6 years old. Guy served as a pilot in the U.S. Air Force for 20 years. He performed multiple tours of duty with the Strategic Air Command from the Cuban Missile Crisis to Vietnam, flying B-47 and B-52 bombers. He returned to Portsmouth to retire at Pease Air Force base at the rank of Major, and was a member of the Order of Daedalians. He completed his baccalaureate degree from Southern New Hampshire University (formerly New Hampshire College of Accounting and Commerce) while in the Air Force. Guy was an active member of Portsmouth Rotary for over 30 years and was recognized five times as a Paul Harris Fellow for outstanding service to the community. He was also a founding and longest serving active board member of Friends Forever in Durham, a grassroots organization that helps youth from conflict-prone regions in Northern Ireland, the Middle East, and Africa build lasting friendships across cultural, religious, and political divides. His passions included flying, driving his automobiles cross-country, ballroom dancing, eating, and watching Red Sox baseball, all of which he enjoyed with great enthusiasm. He is survived by his loving wife Lieu, his sister Ginny Kreuzberger, his brother Greg, his son Eric, and his grandson Dylan. A memorial service followed by military honors and reception will be held at 1PM on Saturday, October 31, 2015 at the Rye Congregational church, 580 Washington Road, Rye, NH 03870. Relatives and friends are respectfully invited. Burial will be private at a later date. In lieu of flowers, the family requests donations be made to Friends Forever, either directly online at: http://www.friendsforeverusa.org and clicking 'DONATE' or by mail to: One Morgan Way, Durham, NH, 03824.

The family of Guy K Buesing created this Life Tributes page to make it easy to share your memories.

Send flowers to the Buesing family.