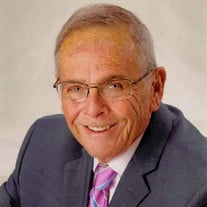 Hampton - H. Raymond Arsenault, 86, of Hampton and formerly of Newburyport, MA, passed away peacefully following a brief illness on Monday November 19, 2018 at his home, surrounded by loving family. Ray was born in Lawrence, MA on April 5, 1932, a son of the late Aurele and Mary (Lemay) Arsenault and he had shared 55 wonderful years of marriage with his wife Margaret (Haley) Arsenault. Ray was raised in Lawrence, MA and was a graduate of Central Catholic High School. He went on to graduate from Boston College with a degree in Chemistry. After graduating, Ray spent close to 40 years at the Raytheon Company and retired in 1994. He and Peg lived and raised their family in Newburyport, MA. Following his retirement, they spent his winters in Vero Beach, FL and summers in Hampton. Ray was very active and involved in his church and all the communities where he lived and had many close friends. His greatest passion was spending time with his family and he was extremely proud of his four boys and all their accomplishments and had a special bond with his 13 grandchildren. Ray was a very skilled craftsman as he found time to remodel several houses, create many woodworking projects and make beautiful stained glass window designs. He also spent countless hours producing intricate hand-made oriental rugs. Ray was an avid skier and tennis player into his later years and was proud that he attained the level of Eagle Scout as a young man. He will be remembered fondly by his children Robert Arsenault and wife Ellen of Hampton and their children Ryan, Connor and Kelly, David Arsenault and wife Amy of Hampton and their children C.J. and wife Sunny, Aaron, Haley and Taylor, Peter Arsenault and wife Colleen of Amesbury, MA and their children Ray, Luke and Will and Jeff Arsenault and wife Judi of Hampton and their children Abby, Travis and Kyle. Ray also leaves his brother Robert Arsenault and wife Rita of Vero Beach, FL and several nieces and nephews. In addition to his parents he was predeceased by premature baby daughter Anne Mary and his sister Jeannette Cooper. Visiting hours will be from 3 to 7 PM on Friday, November 23, 2018 in the Remick & Gendron Funeral Home - Crematory, 811 Lafayette Rd., Hampton, NH. A Mass of Christian Burial will be celebrated at 10 AM on Saturday at Our Lady of the Miraculous Medal Church, 289 Lafayette Rd., Hampton, NH. Burial will be at a later date. In lieu of flowers, memorial donations may be made to Rockingham VNA and Hospice 137 Epping Rd., Exeter, NH 03833.

Hampton - H. Raymond Arsenault, 86, of Hampton and formerly of Newburyport, MA, passed away peacefully following a brief illness on Monday November 19, 2018 at his home, surrounded by loving family. Ray was born in Lawrence, MA on April 5, 1932,... View Obituary & Service Information

The family of H. Raymond Arsenault created this Life Tributes page to make it easy to share your memories.

Hampton - H. Raymond Arsenault, 86, of Hampton and formerly of...

Send flowers to the Arsenault family.