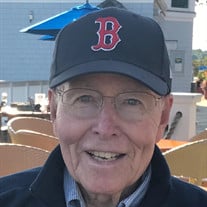 North Hampton – John “Hank” Downey, 91, of North Hampton, passed Friday, June 14, 2019 surrounded by his loving family. Hank was born in Brighton, MA on February 20, 1928, the only child of the late James and Elizabeth (Nealin) Downey. He was raised in Marblehead, MA and graduated from St. John’s Preparatory School in Danvers, MA in 1947 where he excelled in baseball and hockey. He later earned his Bachelor of Science degree from Providence College where he continued to play baseball as the Friars’ starting catcher. Hank was a veteran of the Korean War and a recipient of the National Naval Defense Ribbon, proudly serving with the US Navy. As a commissioned officer, he was assigned to the USS Wyandot and charged with resupplying weather stations in the Arctic Circle. He later served 16 years as a Lieutenant in the Navy Reserves. Following his military service, Hank established his own diaper service business, "Downy Diaper", with the clever slogan "It's Tops for Bottoms!" in Arlington, MA. Hank married his beloved wife, Mary Lou (Burns) Downey, in 1956 and they settled in Marblehead, MA. Soon after, Hank began his more than 33 year career with Sprague Energy; a move that brought Hank, Lou and their growing family to North Hampton, NH. The heart of Hank’s career was with Sprague where he held executive positions in Boston, MA and Newington, NH from 1958-1992. During this time he oversaw the light oil division, was a member of the Home Heat Council, a consultant to the Governor during the oil crisis, a member of the BIA and many other related oil business organizations. After his retirement he continued to work as a consultant for Sprague Energy. Forever civic-minded, Hank firmly believed in always doing his best for others and generously gave his time to better his professional and personal communities. In his earlier years he was a three term President of the Propeller Club in Portsmouth, a member of the Portsmouth Rotary Club for over 30 years and recipient of the Portsmouth Rotary Club Paul Harris Fellowship award, President and member of the Portsmouth Chamber of Commerce and he also served on the Board of Directors for the United Way. He was an active communicant at St. Theresa Parish, member of the Sacred Heart School Board, Vice President of Parish Council at Our Lady of the Miraculous Medal, and for 13 seasons he served on the commission of the North Hampton Youth Association while he proudly coached his five sons in Little League and Pony League. Hank was known as a gentleman and talented athlete who could always be counted on by friends and family alike, but above everything else, he was a devoted father and husband who loved spending time with his wife, children and grandchildren. His favorite times were spent with the family skiing, hiking, camping, playing cribbage, and watching his children and grandchildren play sports. Additionally, he was a lifelong fan of all Boston sports. Hank will also be remembered for his wonderful sense of humor; always quick to play a practical joke on friends and colleagues alike. In their retirement years, Hank and Lou were "happy campers", extensively traveling through the US and Canada in their motor home with their trusted cat and co-pilot, Buddha. In addition to his wife, Hank is survived by his nine children: Deborah (Downey) Sillay and her husband John of North Hampton, Stephen Downey and his partner Ka’au Abraham of Maui, Hawaii, Richard Downey and his wife Lisa of Andover, MA, William Downey of Portsmouth, John Downey, Jr. and his wife Mona of Kennebunk, ME, Brenda (Downey) Worrell and her husband Kenneth of North Hampton, Paul Downey and his wife Karen of Newburyport, MA, Susan (Downey) Gray and her husband John of Rye, and Diane (Downey) Andrews and her husband Mark of North Hampton. He also leaves 14 beautiful grandchildren: Sarah, Lauren, Michael, Sam, Maddie, Killian. Jack, Nolan, Brooke, Caitlin, Ryan, Reese, Gavin and Teagan, and three great grandchildren: Maggie, Libby and Landon. Visiting hours will be from 5:00–7:30 PM, Friday, June 21, 2019 at the Remick & Gendron Funeral Home-Crematory, 811 Lafayette Road, Hampton. A mass of Christian burial will be celebrated at 10:00 AM Saturday, June 22, 2019 at St. Theresa Church, 795 Central Road, Rye Beach. Burial will follow at the Center Cemetery 196 Post Road, North Hampton. Relatives and friends are respectfully invited. In lieu of traditional remembrances, donations may be made to the Alzheimer s Association

The family of Hank Downey created this Life Tributes page to make it easy to share your memories.

Send flowers to the Downey family.