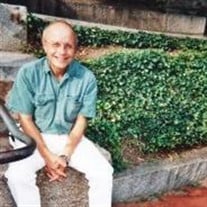 Seabrook – Harold C. “Harry” Mears, 67, of Seabrook and formally of Forked River, NJ, passed away peacefully on Wednesday, January 24, 2018 at the Exeter Hospital surrounded by his loving and caring family. He was born on March 3, 1950 in Lakewood, NJ, a son of the late Harold and Clara (Wioland) Mears. Harry was raised in Forked River, NJ. He earned his Bachelor’s Degree from University of Rhode Island and his Master’s Degree from the University of Maine. Harry was an avid traveler and was passionate about his grandchildren and time gardening with his partner Ric. Whether sledding with his grandson, Laszlo, or strolling his garden with his granddaughter, Ashlyn, his final years were filled with love and peace. He was passionate about his music, cherishing the times he DJ’ed for his daughter’s school dances and attending concerts with friends & family. Harry also loved the ocean. From his early years on the Jersey Shore, Harry’s path always led him back to the water. He recently retired from 40 years of service at NOAA as a fishery biologist and made the difficult decision to leave his work “family” and retire just weeks before his passing. He held cherished memories near the water with his nephew, “cousin Eddie” catching and selling killies and scooping large crabs off the filings in the marina along the Forked River. Harry is survived by his children, Colleen McGettrick and her husband, Brant of West Bridgewater, MA, Monica Kravets and her husband Vadim of Londonderry, NH, Kirsten Ross and her husband Matthew of Ft. Myers, FL and Erin Pollock and her husband Ben of Newton, NH, and his beloved partner Ricardo (Ric) Giraldo Franco. Harry left behind nine grandchildren: Laszlo, Ashlyn, Katja, Brynne, Anneka, Coleman, Lukas, KirstyElla and Donovan. Harry also had three beloved siblings Don (Deceased) (and Fran) Mears, Bob (Deceased) (and Jane) Mears, and Patricia “Patty” Faulkner. Friends may visit from 2 to 4 PM on Sunday, January 28, 2018 in the Remick & Gendron Funeral Home – Crematory, 811 Lafayette Rd., Hampton. Services will be held at 4 PM in the funeral home immediately following the visitation. Burial will be private. In lieu of flowers, memorial donations may be made to The American Cancer Society.

Seabrook &#8211; Harold C. &#8220;Harry&#8221; Mears, 67, of Seabrook and formally of Forked River, NJ, passed away peacefully on Wednesday, January 24, 2018 at the Exeter Hospital surrounded by his loving and caring family. He was born on... View Obituary & Service Information

The family of Harold C. Mears created this Life Tributes page to make it easy to share your memories.