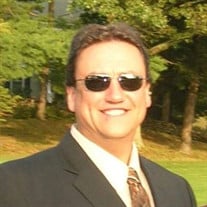 ~ ~ Thank you all so much for the love and support, it is heartfelt and appreciated. Not only here with your kind words, but extended to those who sent cards and flowers, visited to share stories and memories, and to those that prayed for Hardy either in person or in their heart. Love, Sue Seabrook - Harold G. “Hardy” Nedeau, Jr., 49, died Wednesday, July 4, 2018 from injuries sustained in a motorcycle accident near his home in Seabrook. He was born June 4, 1969 in Exeter the son of Brenda J. Perkins of Seabrook and the late Harold G. Nedeau, Sr. Hardy was raised in Seabrook, attended local schools and graduated from Winnacunnet High School with the Class of 1987. An exceptional carpenter Hardy was a member of Carpenters Union of Boston, MA. His family and his nieces and nephews were most important to him. He loved his Harley Davidson motorcycle enjoying the rides with his wife and friends. Hardy was a kind soul with a very charismatic personality. He brought happiness to everyone he met. Even though he was only with us a short time, he has left us with a lifetime of beloved memories that will forever be cherished. Never having had children of his own Uncle Hardy was a true dad at heart as he loved his nieces and nephews as if they were his own. He was loved by many and life will never be the same without him. He truly was the life of the party. He shared 27 years of marriage with his wife, Sue J. (Bourget) Nedeau of Seabrook. In addition to his wife Sue, his beloved mother Brenda and step father Harry Perkins, family members include his father in law Bill and his wife Stella, his sister Catherine Brown and her husband Bruce, his step siblings Harry, Lonnie and Jodi Perkins, brother in law Greg Bourget, nieces Megan, Chloe and Kayleigh, nephews Shane, Raymond and Christopher, 2 special great nephews Bentley and Colton and many more great nephews and nieces, godchildren Jillian and Mark and many aunts, uncles, cousins and friends. In addition to his father he was predeceased by his sister Marilyn Hill, his step sister Tina Perkins, and both his maternal and paternal grandparents. A graveside service will be held at 11 AM Wednesday, July 11, 2018 in the Wildwood Cemetery, South Main Street, Seabrook. Relatives and friends are respectfully invited. In lieu of flowers, donations may be made to a charity of one’s choice.

~ ~ Thank you all so much for the love and support, it is heartfelt and appreciated. Not only here with your kind words, but extended to those who sent cards and flowers, visited to share stories... View Obituary & Service Information

The family of Harold G. "Hardy Nedeau Jr. created this Life Tributes page to make it easy to share your memories.

~ ~
Thank you all so much for the love and support, it is heartfelt...

Send flowers to the Nedeau family.