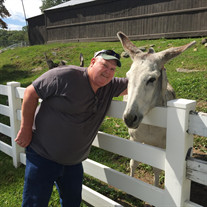 Seabrook - Harry L. Blaisdell, 63, of Seabrook, passed away peacefully in his sleep on October 20, 2020. He was born July 25, 1957 in Newburyport, MA a son of the late Alton “Zilly” and Edna (Blaisdell) Eaton. Harry enjoyed chasing the ladies, ice cream (but you wouldn’t like it), badonkadonkin’ at the beach, and collecting plastic bags. An avid patron of the Seabrook Dog Track, a veteran of the US Army, and an expert aggravator, Harry will be missed by many. He will be remembered for his kind heart, sense of humor and incredible generosity. He was a member of several organizations including the Seabrook Legion Post 70, Saint James Lodge NO. 102, Elks Lodge NO. 0909, Scottish Rite, the Seabrook Fireman's Association, Plumbers & Gasfitters Boston Local NO. 12 and the Iron Workers Local 7 Union. He is survived by his beloved daughter, Ashley Frances Blaisdell, his grandchildren Kylie Belle, and Madison Judith; sister Charlene Mills; brothers, Cliff Newgard and Al Eaton, his wife Shelly and their children; niece Trisha Beringer, her husband Micah Beringer and their children, Azalea “Zilly” and Zeke Beringer; and niece Makayla McDonald. Oh, and his favorite Aunt Jane. Harry’s memory will live on with all of his friends and family including his lifelong brothers Charles Felch, Clyde Eaton, and Jesse Fowler. As Harry would say, “This ain’t no ordinary hat rack. There’s somethin’ up under here.” Maybe now we’ll listen to him. Services will be held at a later date. Please check back for details.

The family of Harry L. Blaisdell created this Life Tributes page to make it easy to share your memories.

Send flowers to the Blaisdell family.