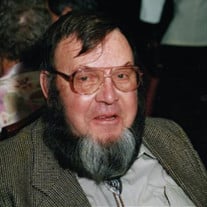 Greenland - Harry Leslie Martin passed away peacefully at the age of 86, on May 5, 2022, after a long illness. He spent his final days surrounded by family members and his wife of 65 years. Harry was born in Kingston, NH, on February 1, 1936, the son of the late Melvin and Ruth Martin. After his retirement from the State of New Hampshire Highway Department, Harry devoted all his time to gardening, woodworking, and being an extraordinary father and grandfather. Harry was a true New England native, the 12th generation of his family to be born and raised in New Hampshire. Throughout his life and until his very last days, nothing brought a bigger smile to Harry’s face than talking about his wife, the former Mary Lou Higgins of Ipswich. In addition to his wife, Harry leaves four children: Dean and Robin Martin of Ormond Beach, Florida, Timothy Martin and Frank Wilson of Fort Lauderdale, Kimberly Martin and Ralph Place of Eliot, and Lisa Martin and fiancé Greg Berk of Dover. He is also survived by his brother, Donald Martin of Danville, his grandchildren Kimberly and Rob Conley, Katrina and Nick Harbaugh, Issac Dutkowski and Eliott Place, and great grandchildren Amelia Harbaugh, Jamie Conley, Jaylee Conley, Kelsey and Carrie Hubbard and their son Brayden, as well as numerous extended family members. Harry was predeceased by his brothers Everett and Wayne Martin, as well as his grandson, Jamie Burdick. Visitation will be held from 5 – 7 PM on Tuesday, May 10, 2022 at the Remick and Gendron Funeral Home-Crematory, 811 Lafayette Road, Hampton, NH 03842. Services are scheduled for 11 AM on Wednesday, May 11, 2022 at Community Congregational Church, 2 Post Road, Greenland, NH 03840. Burial will follow in the Prospect Hill Cemetery, Greenland. In lieu of flowers, the family has requested that donations be made to Community Congregational Church, Box 128, Greenland, NH 03840 in Harry’s memory.

Greenland - Harry Leslie Martin passed away peacefully at the age of 86, on May 5, 2022, after a long illness. He spent his final days surrounded by family members and his wife of 65 years. Harry was born in Kingston, NH, on February 1, 1936,... View Obituary & Service Information

The family of Harry L. Martin created this Life Tributes page to make it easy to share your memories.

Greenland - Harry Leslie Martin passed away peacefully at the...