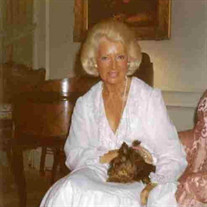 North Hampton - Helen Doyle Flynn of North Hampton and formerly of Rye Beach, NH, passed away peacefully on August 17, 2021. She was born December 17, 1923 to James J. Doyle and Mary O’Connell Doyle in Medford, Massachusetts. Helen graduated from Medford High School at the age of 16 and continued her education at Katherine Gibbs School in Boston. During World War II, she became the Executive Secretary for the Military Commander who headed the Boston Embarkation Division which scheduled transportation, including convoys. It was a job requiring a Top Secret clearance. Following World War II, she worked as an Administrative Assistant for Congressman John F. Kennedy. In 1952 where she was involved in his campaign for the United States Senate, hosting “Tea Parties” which led to his election. Later she worked in public relations and subsequently became Administrative Assistant to the President of a prominent Boston chemical company. While living in the Boston area, she was a member of many organizations, including Saint Anthony’s Guild, of which she was a life member, the Museum of Fine Arts, with 35 years of membership, Board Member of the Civic Sympathy Orchestra of Boston, a member of the College Club of Boston, the Speech and Hearing Foundation, The Friends of Emerson College and the Boston Ace of Clubs. In 1969, she married Judge Thomas E. Flynn and moved to his home at Rye Beach, New Hampshire. After moving to Rye Beach, she became very active in area organizations including The Rye Art Study Group, The Rye Driftwood-Garden Club and the Wentworth By The Sea Country Club. She served both as an Overseer of Strawbery Banke in Portsmouth as well as on the Board of Trustees. She had a special interest in the Thomas Bailey Aldrich House and worked with the Banke in both acquiring it and restoring it. Extensive charitable work led to her being named to The Equestrian Order of The Knights of The Holy Sepulcher of Jerusalem. More recently, she was elected as a Board Member of the Women of Northern Essex Community College. During her life she travelled extensively through Europe, Russia, China, Japan, Mexico, North Africa, South America, Thailand and Israel. Helen was predeceased by her husband, Judge Thomas E. Flynn as well her parents. She was also predeceased by her brother, Dr. John Doyle, late of Rye, and her brother, James Doyle, late of Lake Forest, Illinois. She is survived by nieces and nephews: Justin Doyle of Bangkok, Thailand; Lisa Duerr of Memphis, Tennessee, Shauna de Brun of Natchez, Mississippi, Carey Doyle of Kayenta, Arizona, Gavin Doyle of London, England, Janice Harring of Beaufort, South Carolina, Susan Kelliher of Palm Beach Gardens, Florida, Nancy Stewart of Richmond, Virigina and Marilyn Weier of Lake Forrest, Illinois. She is also survived by her late husband’s nephew and former law partner, John P. McGee Jr of Portsmouth and his niece, Janet McGee Saunders of Kingston, New Hampshire. A Mass of Christian Burial will be celebrated at 11 am on Friday, August 27, 2021 at St. Theresa’s Church, 815 Central Rd., Rye Beach, New Hampshire. Burial will follow in the Central Cemetery, Rye. For those that cannot attend, the Mass will be live-streamed at [https://www.sainttheresachurchrye.org/live-streaming]. Family flowers only please but if desired, memorial donations may be made to the St. Charles School, formerly the St. Charles Home, 19 Grant Street, Rochester, NH 03867, online though Catholic Charities [https://www.cc-nh.org/donate/] or to a charity of one’s choice.

The family of Helen Doyle Flynn created this Life Tributes page to make it easy to share your memories.

Send flowers to the Flynn family.