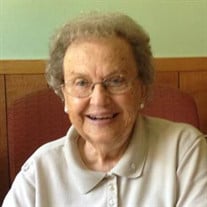 Helen's service information will be available soon, please check back. Hampton – Helen Stephanie Gibadlo, 94, a long-time Hampton resident, passed away on February 24, 2018 at Webster at Rye. She was born at home on July 18, 1923 in Clinton, MA to Stanislaw Kulis and Mary (Voskeirs) Kulis. Helen graduated from Lowell High School (Class of 1942) and was subsequently the sole proprietor of Helen’s Beauty Shop of Lowell. In her youth, she enjoyed dancing, visiting Hampton beach with her girlfriends, and bowling – taking home many trophies for her efforts. She met her future husband, Robert, at the Polish National Home in Lawrence, MA where they enjoyed dancing, conversation, and authentic Polish food as was accustomed to their heritage. Her married life with Robert began on October 28, 1951 and lasted for 62 years until Robert’s death in 2013. During this time, Helen was in charge of the household helping raise four children and providing invaluable love and nurturing to her two oldest grandchildren. She was longtime member of Portsmouth Country Club and could often be seen early in the season traveling the links with her gal pals; Betty Page, Theresa Ryan, and Peg Seavey. During her Monday night golf league, she left her husband in charge of providing dinner for her family, and after returning home, would be amused by the secret ingredients that he had placed into the center of the meat loaf. Prior to her husband’s retirement in 1986, Helen and Bob began a number of memorable adventures which took them to Hawaii, Spain, Bangkok and the island of Phuket. After retiring, Bob and Helen enjoyed winters in Myrtle Beach, SC where they played golf and expanded upon their network of friends. They were active promoters of the Grasshoppers of New Hampshire for a number of years. Survivors include her daughter Donna (husband Terry Harvey) of Greenland, sons; Robert of Hampton, Richard (wife Sharen) of Hampton, and Donald of Hampton, grandchildren; Cari Bourn of Stratham, Emily, Daniella & Darren Gibadlo of Hampton, Chad Gibadlo of Concord, NH, and greatgrandchildren; Hailee Gibadlo of Amesbury MA, Audrey, Austin & Gabriel Bourn of Stratham, and Ella Gibadlo of Exeter. A Mass of Christian Burial will be celebrated at 11 am on Friday, April 6, 2018 at Our Lady of the Miraculous Medal Church, 289 Lafayette Rd., Hampton. Burial will be with her husband, Robert in the High Street Cemetery. In lieu of flowers, memorial donations may be made to a local charity of one’s choice.

Helen's service information will be available soon, please check back. Hampton &#8211; Helen Stephanie Gibadlo, 94, a long-time Hampton resident, passed away on February 24, 2018 at Webster at Rye. She was born at home on July 18, 1923 in... View Obituary & Service Information

The family of Helen S. Gibadlo created this Life Tributes page to make it easy to share your memories.

Send flowers to the Gibadlo family.