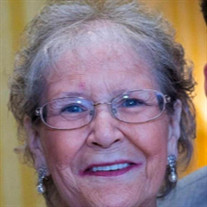 Rochester - Helen M. Howell, 71, of Rochester, after a long battle with cancer, died Wednesday, March 4, 2020 at her daughter’s home in Greenland with loving family by her side. She was born in Fall River, MA September 26, 1948 a daughter of the late Willis and Edith (Almy) Davis. Helen was raised in Tiverton, RI where she gained her love of the ocean and collecting sea glass. After graduating from Durfee High School she married the love of her life John A. Howell and became a military Air Force wife travelling and living in Bangor, ME, Puerto Rico, upper state New York, Nebraska and New Hampshire. While living in New Hampshire she made her home in Rochester the past seven years, Ossipee for nine, and prior to that North Hampton. She was employed by Liberty Mutual Insurance Group for 13 years before retiring. Her love of dogs, especially her two Jack Russel Terriers Maggie and Molly, drove her to be a longtime supporter of the S.P.C.A.. She enjoyed cooking, sewing and gardening. You would always see a crossword puzzle book by her side and she loved when the hummingbirds visited her. Family is what brought her the greatest joy. Watching her grandchildren and great grandchildren play brought the biggest smiles to her face. She shared 53 years of marriage with her husband John (Jack) who predeceased her on February 4, 2019. Family members include three daughters: Angela Moynahan and her husband Timothy of Greenland, Tammy Hale and her husband Toby of Exeter, and Christine Waniak-Howell also of Exeter, nine grandchildren: Zachary, Jordan, Tabitha, Tiara, Ross, Reed, Alexander, Olivia and Elle. Four great grandchildren: Cole, Reagan, Juliana and Weston. She also had many nieces and nephews. In addition to her husband and parents, she was also predeceased by her brother Randy Davis and her sister Lillian Buckley. The family will be having a private service celebrating her life. If desired, donations may be made to the New Hampshire SPCA

Rochester - Helen M. Howell, 71, of Rochester, after a long battle with cancer, died Wednesday, March 4, 2020 at her daughter&#8217;s home in Greenland with loving family by her side. She was born in Fall River, MA September 26, 1948 a daughter... View Obituary & Service Information

The family of Helen M. Howell created this Life Tributes page to make it easy to share your memories.