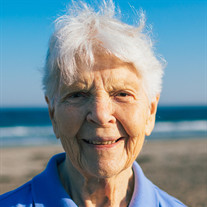 Rye - Helen V. McKeon passed away on the evening of January 5, 2017 in Portsmouth. She was born Helen Crowley on September 1, 1924 in Malden, MA, the proud daughter of the late Joseph P. Crowley, a police officer in Melrose, MA, and Helen C. Crowley, who would later work for National Radio. One of five children, she grew up in Melrose, and after graduating from Melrose High School, she became a legal secretary for the Boston law firm Warner, Stackpole, Stetson & Bradley, volunteered at the Boston USO, and attended modeling school. Her children raised, she returned to her profession of secretary, first working for the Wing Commander at Wiesbaden Air Force Base in Germany and then as a legal secretary at Tetler & Holmes in Hampton. In the summer of 1946, while vacationing in Hyannis, she met her husband, Patrick J. McKeon, and they fell in love at first sight. They were married six months later and lived life together for 45 years, until Patrick’s death in 1991. Helen traveled the country and Europe as the wife of an Air Force officer, accepting with good humor and resiliency the nomadic lifestyle of the military wife, including once traveling by car from California to Massachusetts with an eight-day-old infant and two toddlers. Highlights of her travel included her trip to Russia with her son Pat, a trip to Italy with her daughter, Karen, where she received a blessing from Pope Paul VI, a trip to Vienna on the Mozart Express, and a family Christmas in Lucerne, Switzerland. Helen was politically involved and met Barack Obama, Ted Kennedy, and Hillary Clinton. She was a member of St. Theresa’s Parish in Rye and St. Theresa’s Bible Study Group as well as the Officers’ Wives Club. Until she lost her sight, she was a voracious reader of at least two newspapers each morning and countless books. Helen was a deeply religious person, with a limitless love for her family, particularly her seven grandchildren -- Kris and Heather Trocha, Casey and Jack Heimerman, Keating McKeon, and Katie and Patrick McKeon -- and her two great-grandchildren, Campbell Trocha and Madeline Bates. She had boundless good humor, a quick wit, unshakeable faith, unimpeachable integrity, remarkable insight, and an unerring sense of what was right and just. Throughout her lifetime, she treated everyone with kindness and respect. In addition to her grandchildren and great grandchildren, Helen is survived by her daughter Susan P. McKeon of San Diego, CA: her son Patrick J. McKeon III and his wife Hilary Laraba of West Boylston, MA; her daughter Karen A. McKeon and husband Jon Heimerman of Alexandria, VA; her son Michael P. McKeon and wife Joan Keating-McKeon of West Hartford, CT; her brother Robert Crowley and sister Joan Dobias; numerous nieces and nephews and many friends, particularly Lois and her wonderful, loving neighbors, Sandy and Bill, and their children, Colin and Alexa. In addition to her parents and husband Lt. Col. Patrick J. McKeon, she was predeceased by her Baby Patricia Anne McKeon and brothers, Joseph Crowley and Colonel Edward Crowley. Your life was a blessing, your memory, a treasure; you are loved beyond words and missed beyond measure. Visiting hours will be from 10 to 11 AM on Tuesday, January 10, 2017 in the Remick & Gendron Funeral Home-Crematory, 811 Lafayette Rd., Hampton. Following the visitation a Mass of Christian Burial will be celebrated at 12 PM in St. Theresa Parish, 815 Central Rd., Rye Beach. Interment will follow in the Central Cemetery, Rye. In lieu of flowers donations may be made to St. Theresa Parish, 815 Central Rd., Rye Beach 03871.

Rye - Helen V. McKeon passed away on the evening of January 5, 2017 in Portsmouth. She was born Helen Crowley on September 1, 1924 in Malden, MA, the proud daughter of the late Joseph P. Crowley, a police officer in Melrose, MA, and Helen C.... View Obituary & Service Information

The family of Helen V. McKeon created this Life Tributes page to make it easy to share your memories.

Rye - Helen V. McKeon passed away on the evening of January 5,...

Send flowers to the McKeon family.