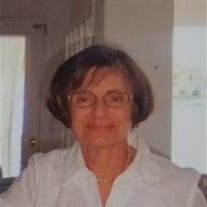 Hampton – Helen J. Whiteside, 86, of Hampton, died peacefully, with her children by her side, on Tuesday, January 1, 2019 at Portsmouth Regional Hospital. She was born July 6, 1932 in Manchester a daughter of the late Markos and Olga (Stoumbos) Kourtis. Helen was raised in Manchester and graduated from Manchester Central High School and Tewksbury, MA Nursing School where she received her degree in nursing. She was employed as a Registered Nurse at the Soldiers Home in Chelsea, MA for more than 30 years. She made her home in Hampton since 1985 coming from Revere, MA and had wintered in Port Charlotte, FL for over 10 years. Family and her grandchildren were most important in her life as well as enjoying the beach, travelling, camping and in her earlier years playing the violin. She was a member of St. George Greek Orthodox Church in Manchester. She was the wife of the late Richard T. Whiteside, who predeceased her in 2016, whom she was married to for over 40 years. She leaves her son, Mark DeFeo and his wife Lisa of Hampton, her daughter, Mary Ann Stepp and her husband Steven of Pitman, NJ, the father of her children, Alphonso DeFeo, two step children, Richard Whiteside and his wife Suzanne, Laura Boccelli and her husband Michael all of Hampton,16 grandchildren, many great grandchildren, nieces and nephews. In addition to her husband and parents, she was predeceased by her sisters, Anastasia Tsipopoulas, Irene Edgerly and her stepchildren, Elaine Wilson and Patricia Scire. Visiting hours will be from 5-8 P.M. Monday, January 7, 2019 at the Remick & Gendron Funeral Home-Crematory, 811 Lafayette Road, Hampton. A Trisagion service will be held at 7 P.M. Services will be held at 11 A.M. Tuesday, January 8, 2019 at St. George Greek Orthodox Church, 650 Hanover Street, Manchester. Burial will follow in Pine Grove Cemetery, Manchester. Relatives and friends are respectfully invited.

Hampton &#8211; Helen J. Whiteside, 86, of Hampton, died peacefully, with her children by her side, on Tuesday, January 1, 2019 at Portsmouth Regional Hospital. She was born July 6, 1932 in Manchester a daughter of the late Markos and Olga... View Obituary & Service Information

The family of Helen J. Whiteside created this Life Tributes page to make it easy to share your memories.

Send flowers to the Whiteside family.