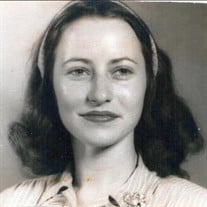 Hampton - Helena Duff Miskill, 98, passed away peacefully on Wednesday, February 23, 2022, with her son Tom by her side and with her daughter Janice on facetime. She was born on September 1, 1923 in Portland, ME to Peter and Mary Duff and was raised with her sisters Mary and Betty and her brothers Jack and Joe. Helena graduated from Deering High School and later went to college in Portland for a time. She became a secretary at Bath Iron Works where she met a young Naval Officer, Thomas Miskill, and soon after were married. Because the war was raging, Tom and Helena were stationed in many different states with Tom serving at several duty stations designing destroyers and Helena, a navy wife, at home raising new twins and a son. Tom served on destroyers throughout World War II, Korean War and the Suez crisis. Helena had two more girls during the next years until Tom got a final duty station as Commander of the Naval Facility in Antigua, BWI. After retiring from the Navy, the family settled in Huntington, NY where Tom worked at EDO Corporation and mom kept the home beautiful and raised their family. While in Huntington, Helena was always involved with her church and she and Tom made many friends. After retiring from EDO, Tom and Helena moved to Downers Grove, III where Tom would work for Everpure Inc. as Vice President and Helena kept up their home and cared for her mother. In 1980, Helena purchased their retirement home in Rye, NH where she had spent a lot of time when she was young with her family and her closest friend Cay Driscoll. Helena and Tom enjoyed their retirement in Rye and were members of the Portsmouth Country Club and faithful communicants of St. Theresa's Parish. During the winters, Tom and Helena would spend their time in Kauai with their younger daughter’s family. In time it would become like their second home with many friends on the island and many cherished moments. Tom passing in June, 2003 from mesothelioma was a huge shock to the Miskill family. Helena stayed in her home with her son Tom who cared for her and their home since that time. She did some traveling with her family and friends over the remaining years until her health declined. Tom continued as her caregiver until dementia overcame Helena and she was placed in a total care facility.

Hampton - Helena Duff Miskill, 98, passed away peacefully on Wednesday, February 23, 2022, with her son Tom by her side and with her daughter Janice on facetime. She was born on September 1, 1923 in Portland, ME to Peter and Mary Duff and was... View Obituary & Service Information

The family of Helena Miskill created this Life Tributes page to make it easy to share your memories.

Send flowers to the Miskill family.