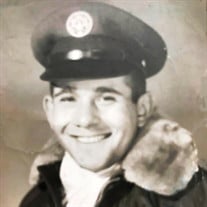 Portsmouth – Henry E. Chomas, (USAF, Ret.), passed away peacefully with beloved family at his bedside on Friday, September 21, 2018 at the Portsmouth Hospital. Henry was born in Brooklyn, NY on June 10, 1939, the son of the late Henry and Janet (Chorax) Chomas. Henry was raised in Queens, NYC and entered the United States Air Force in1957 shortly after graduation from high school. He and his childhood sweetheart, Rita (Marciano) Chomas were married in 1959 and began a 20 year Air Force career together, eventually relocating to New Hampshire in 1971 when Henry was transferred to Pease, AFB. A Vietnam veteran, Henry served his country honorably until his retirement in 1977. Upon leaving the Air Force, he worked as shipwright at the Portsmouth Naval Shipyard for over 15 years, retiring in1992. Henry was a very spiritual man and a faithful communicant of the former St. James Church in Portsmouth. He was also a very talented sketch artist and loved sharing his works with family and friends. He was a dedicated weight lifter well into his 50’s, an avid coin collector and particularly enjoyed cruising around in his Jaguar XJS. In addition to Rita, his beloved wife of 59 years, Henry leaves his son, Scott Chomas and his wife Roxanna of Epping, his daughter, Janet Heller and her husband, Karl of Dover and his sister, Janet Stegman and her husband Henry of Las Vegas. He also leaves his grandchildren, Ian Heller and his wife Melissa, Raef Heller and his fiancée Carey LeBlanc, and Hanna Chomas, his great grandchildren, Cohen, Dax, Fischer and Remi Heller and several nieces and nephews. Family and friends may visit from 5 to 7 PM on Thursday, September 27, 2018 in the Remick & Gendron Funeral Home – Crematory, 811 Lafayette Rd., Hampton. A Prayer Service will follow the visitation starting at 7 PM in the funeral home. Burial will be on Friday at 12 PM at the New Hampshire State Veterans Cemetery, 110 Daniel Webster Hwy, Boscawen. If desired memorial donations may be made to Disabled American Veterans at www.dav.org.

Portsmouth &#8211; Henry E. Chomas, (USAF, Ret.), passed away peacefully with beloved family at his bedside on Friday, September 21, 2018 at the Portsmouth Hospital. Henry was born in Brooklyn, NY on June 10, 1939, the son of the late Henry... View Obituary & Service Information

The family of Henry E. Chomas created this Life Tributes page to make it easy to share your memories.

Send flowers to the Chomas family.