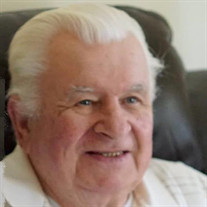 Hampton – Herbert J. “Herb” Price, 82, of Hampton, passed away peacefully at his home, surrounded by family, early on Tuesday morning, August 21, 2018. Herb was born in Akron, OH on September 2, 1935, the son of the late Walter R. and Mildred F. (Kapeluck) Price. He was raised in Akron and enlisted in the United States Air Force when he was 17 years old. While stationed at Pease AFB, Herb attended a dance in Portsmouth where he met and fell in love with Lorraine Paradis. Herb and Lorraine were married in 1957 and settled in Hampton in 1962 where they raised their family, and lived until the time of his death. Herb was a boom operator with the Air Force and served his country honorably during the Korean and Viet Nam Wars. He retired from the service in 1972 and got into the security field where he worked as a private security guard and held security positions with Baily Corp, Wheelabrator-Frye, Seabrook Station and Timberland. He was a member of the St. James Lodge #102 F & AM of Hampton and the Hampton Falls Grange. Following in his father’s footsteps, Herb possessed an extraordinary musical talent. He was a self-taught pianist and could play by ear. He competed in local talent shows and took first place in the New Hampshire Grange State Talent Show which earned him a spot in the national competition in Nebraska. Herb was hard-working man and a great provider for the family he loved so much. He was a voracious reader, was good with his hands and loved tinkering around the house. His sense of humor was unmatched and he was definitely the cool dad to his kids and their friends. Herb wouldn’t leave the house until his hair was perfectly groomed so he could, in his own words, “look good for his fans.” He will be missed by Lorraine, his wife of over 61 years, his sons, John Price of Hooksett and James Price of Rochester, his daughters, Jacqueline Price of Hampton, Jennifer Rochette and her husband, Victor of Dunnellon, FL, Joanna Martinsen and her husband, Rob of Chesapeake, VA and Jill Deschend and her husband, Bob, of Salem and his sister Adrianne Luetjens of Albuquerque, NM. He also leaves his 8 grandchildren, Adam Price, Tiffany and Jaclyn Headley, Nicole Schnitkey, Nicholas Brown, Courtney Debit and Brittany and Sarah Price and his 5 great grandchildren. Visiting hours will be from 1 to 3 PM on Sunday, August 26, 2018 in the Remick & Gendron Funeral Home – Crematory, 811 Lafayette Rd., Hampton. A Masonic Service and Memorial service will follow starting at 3 PM in the funeral home. Family and friends are respectfully invited. Burial will be private in the NH State Veterans Cemetery. If desired, memorial donations may be made to the New Hampshire SPCA, PO Box 196, Stratham, NH 03885.

The family of Herbert J. Price created this Life Tributes page to make it easy to share your memories.

Send flowers to the Price family.