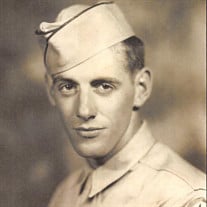 Stratham – Hollis A. Durant, 94, of Stratham, died Tuesday, November 24, 2015 at Exeter Hospital. He was born in Hampton, October 3, 1921 the son of the late Clinton H. and Lena Mae (Hamel) Durant. Mr. Durant was a veteran of WWII serving in the US Army. He was a participant in the Invasion of Normandy and the Battle of the Bulge serving 23 months overseas in England, France, Belgium, Holland and Germany. He worked as an equipment specialist at the Portsmouth Naval Shipyard for many years. Mr. Durant had resided in Stratham since 1958 coming from Portsmouth and before that West Newbury, MA. He was a member of the Stratham Community Church, life member of the Hamptons American Legion Post #35, VFW Post 2181 of Exeter, IFPTE Local 4 of Portsmouth and was also a member of St. James Lodge #102 F. & A.M. of Hampton. He was the husband of the late Audrey M. (Swap) Durant who predeceased him in 2003. Family members include two sons, John H. Durant and his wife Nancy of North Hampton, Hollis A. Durant, Jr. of Exeter, three daughters, Ellen A. Cole of Amesbury, MA, Alicia C. Smith and her husband Dennis of Hammond, WI, Joyce L. Goodwin and her husband Gerald of Delaware, 7 grandchildren, 7 great grandchildren, two brothers, Robert Durant of Hampton Falls, Arthur “Jim” Durant of Hampton, four sisters, Ethel Small and Martha Janvrin both of Seabrook, Bessie Chase of Amesbury, MA, Mildred Cote of Dover, several nieces and nephews. He was predeceased by siblings, Walter, Richard and Russell Durant, Gertude Brown and Grace Brown. Visiting hours will be from 4-6 P.M. Monday, November 30, 2015 at the Remick & Gendron Funeral Home-Crematory, 811 Lafayette Road, Hampton with American Legion services at 5:45 P.M. and Masonic services at 6 P.M. A graveside service will be held at 11 A.M. Tuesday, December 1, 2015 in Maple Lane Cemetery, Stratham. Family flowers only. If desired, donations may be made to the Liberty House, 75 W. Baker Street, Manchester, NH 03103 or online at www.LibertyHouseNH.org/donate/. Relatives and friends are respectfully invited.

The family of Hollis A. Durant created this Life Tributes page to make it easy to share your memories.

Send flowers to the Durant family.