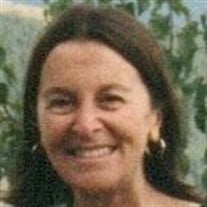 North Hampton — Holly Perrault, 81, of North Hampton, passed away at home on Saturday, September 5, 2020, surrounded by family, following a long illness. Holly was born in Concord, NH, on the winter solstice, 1938, to Helen (née Davis, of Portland, ME) and Daniel Hages (of Livadi, Greece.) She attended Howard Seminary in West Bridgewater, MA, and earned her B.A. from Wheaton College in Norton, MA. It was at Wheaton that Holly began her love of literature, especially that of women writers. Holly met her husband John when the two were teaching English at Traip Academy in Kittery, ME. She taught fourteen years at Traip, earned an M.A. in English from UNH, and went on to teach humanities at McIntosh, Endicott and New England Colleges. Subsequently, she taught women’s literature in the Women’s Studies Program at UNH. Over the years, many of her former students have thanked Holly for introducing them to the world of literature, the arts, and women’s rights. Holly was a voracious reader and loved to play the piano. She was also an avid tennis player. A life-long learner, she studied French at the Middlebury College Summer Language School, photography at the Rockport Maine Workshop, and painting at UNH. Holly wrote poems and short stories, and led book group discussions for both the NH Humanities Council and the North Hampton Public Library. Holly’s love of travel and photography resulted in riveting photographs that, along with her introspective paintings, now grace the walls of her home in North Hampton. Holly loved her family with all her heart and is greatly missed. She is survived by her husband John and daughters Kristen and Tracie; her sister Elaine and brother-in-law Kurt Swenson of Hopkinton, NH; her brother Keith Hages of Cambridge, MA; and several nieces and nephews. She was pre-deceased by her sister Diana Richey of Pompano Beach, FL. Given the pandemic, no memorial service is planned at this time. In lieu of flowers, donations may be made on Holly’s behalf to the Friends of the North Hampton (NH) Public Library or to Peace Ridge Sanctuary in Brooks, ME.

The family of Holly A. Perrault created this Life Tributes page to make it easy to share your memories.