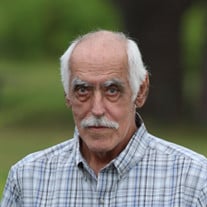 Seabrook – Howard L. Janvrin, Jr., 72, of Seabrook, died Friday, April 29, 2016 after a year-long courageous battle with Lymphoma, at his home with loving family by his bedside. He was born in Newburyport, MA on October 16, 1943, a son of the late Howard L. Janvrin Sr. and Mary “Liz” (Heywood) Janvrin. Howard was raised in Seabrook and was a 1961 graduate of Winnacunnet High School. He worked as a carpenter for most of his life and was a member of Lawrence Local 111 for over 20 years. Howard fell in love with Betty Knowles, his next door neighbor; they were married and settled in Seabrook to raise their family. He was a “Gentle Giant” in many respects, a quiet man with great strength, both inside and out. His satisfaction and happiness in life was in helping others. He was always available to assist in anyone’s time of need. Above all else, Howard was fiercely dedicated to his family, especially his grandchildren. He loved to tease his grandkids, often about being lost while driving around, just to get them excited. He was a wonderful Puppa and will be remembered for his familiar “Me Too” response whenever the kids told him how much they loved him. Howard’s favorite pastime was spending time with his grandchildren, doing the things they loved to do like fishing or attending sports events. In his time of need, Howard’s selflessness was recognized by the dedication of his wonderful granddaughter Hayley. Just like ‘Her Puppa’, Hayley dedicated her life to caring for her grandfather during his year of need. Hayley managed his medications, coordinated all appointments and was by his side through it all, until the end. Family members include his wife of over 50 years, Betty (Knowles) Janvrin of Seabrook; his children, Richard Lapierre and his wife Rebecca of Exeter, Gary Janvrin and his wife Lauren Glancy of East Kingston, Ananias Janvrin of Seabrook and his daughter, Michelle “Missy” Moulton and her husband, Scott, of Seabrook. He is also survived by his 8 grandchildren, his 2, soon to be 3, great grandchildren and his 2 nieces. In addition to his parents he was predeceased by his brother, Ananias, who was killed in the Korean War, his sister, Jean Thurlow and his nephew, Leon Garrett. Visiting hours will be from 5 to 8 pm on Tuesday, May 3, 2016 in the Remick & Gendron Funeral Home-Crematory, 811 Lafayette Road, Hampton. A Memorial Service will be held at 11 am on Wednesday in the funeral home. Family and friends are respectfully invited. A gathering of family and friends will follow at Howard’s daughter’s home at 71 Viola Circle, in Seabrook. In lieu of flowers, memorial donations may be made to the American Cancer Fund, PO Box 7262 Hillsborough NJ, 08844.

The family of Howard L. Janvrin, Jr. created this Life Tributes page to make it easy to share your memories.

Send flowers to the Janvrin family.