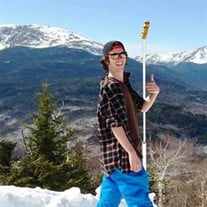 Hampton - Hunter Alden Vars, 21, of Hampton and formerly of East Kingston, died Monday, February 29, 2016 after an auto accident. Hunter was born January 23, 1995 in Peterborough, graduated from Exeter High and attended Montana State University. He was a competitive soccer and rugby player as well as an avid snowboarder. Hunter had a profound affection for his new family and he will be sadly missed. He is survived by his mother, Debra A. Vars and her partner Thomas Luibheid, of East Kingston, his father Ronald E. Vars and his partner Heather I Hughes of Hampton, his sister Eden E.G. Vars and his step family Lara, Adam and Oscar Weed. Hunter also leaves his maternal grandfather Donald Sawyer of Berwick, ME, his paternal grandparents, Charles and Rolinda Vars of Amherst and his numerous cousins, aunts, uncles and good friends. Visitation will be from 5 to 8 pm on Monday, March 7, 2016 in the Remick & Gendron Funeral Home – Crematory, 811 Lafayette Rd., Hampton. Burial will be held at 10 am on Tuesday, March 8 at the Oaklawn Cemetery in Hampton Falls where he will be laid to rest beside his beloved uncle, Tom Christo. Relatives and friends are respectfully invited. In lieu of flowers, memorial gifts may be made to a cause Hunter would be proud to support given his love of the mountains. Donations may be mailed to AbilityPLUS Adaptive Sports, Adaptive Skiing, 855 Hanover Street #497, Manchester, NH 03104 or made online at http://www.abilityplus.org.

The family of Hunter Alden Vars created this Life Tributes page to make it easy to share your memories.

Hampton - Hunter Alden Vars, 21, of Hampton and formerly of East...

Send flowers to the Vars family.