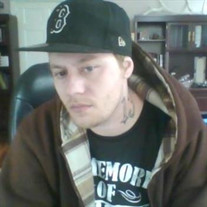 Seabrook – Ike Lowell Eaton, 29, of Seabrook, passed away unexpectedly March 31, 2016. He was born April 9, 1986 the son of the late Ivan Q. and Linda D. (Poirier) Eaton, Jr. Ike was raised in Somerville, South Carolina until the age of 11 until he lost his beloved mother to cancer. Ike went on to graduate from Dunedin Academy in Dunedin, FL and then resided in Key West, FL before moving to Seabrook. Ike loved life, was always smiling and fiercely loyal to those he loved. He will truly be missed deeply. Ike was the owner of rental property. He is survived by his paternal grandmother, Joanne Eaton of Seabrook, his maternal grandmother, India .Poirier of Texas, his sister, Dyanna Williams and her husband Jason, his brother Ivan Q. Eaton, III and his wife Mimi all of Seabrook, his sister, Lisa Twombley of San Diego, CA, his trustee and friend, William Walsh and his wife Valerie of Seabrook, his aunts, Liona, Sandra and Jenny, his uncles, George “Bozo” and his wife April and Milton, nieces, Jessica, Ayanna, Haley, and Alisha, nephews, Johnathan, Nicholas, James and Richard and cousins, Aimee, Jojo and Nicky. He was predeceased by his paternal grandfather, Ivan Q. Eaton, Sr., and his maternal grandfather, Milton F. Poirier, Sr., as well as cousins, Michael and Ronald Butler. Visiting hours will be from 2-4 and 6-8 P.M. Saturday, April 9, 2016 at the Remick & Gendron Funeral Home-Crematory, 811 Lafayette Road, Hampton. Services will be held at 2 P.M., Sunday, April 10, 2016 at Four Corners Advent Christian Church, 5 Farm Lane, Seabrook. Burial will follow in the Hillside Cemetery, Seabrook. Relatives and friends are respectfully invited.

The family of Ike Lowell Eaton created this Life Tributes page to make it easy to share your memories.