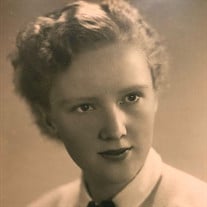 Durham - Ingeburg Petersen Martinen, 89, of Durham and a former longtime resident of Hampton, passed away peacefully on Sunday, November 7, 2021. She was born in the northern village of Ruellschau, Germany to Grete Detlefsen and Hans Petersen. As a child, she played outdoors in the fields, watched her woodworker father in his shop, and helped her mother with the gardening, the chickens, their pig and one cow. When she was sixteen, the bright and beautiful young woman had her first adventure, travelling to Sweden one summer to be a nanny. Her big adventure began when she met Horst “Hank” Martinen, her future husband and love of her life, a tall, handsome young man from the island of Amrum in the North Sea who was attending trade school in the area. Inge and Hank were married in 1952 and embarked a year later to America. They eventually settling in Brooklyn, NY and Inge became an American citizen in 1959. In 1963, Ingeburg and Horst relocated from Brooklyn to Hampton, NH. Hank, a shoe machinist, had stumbled across Hampton during one of his New England job outings and decided Hampton was the place he wanted to call home. In 1971, Inge and Hank purchased the Town & Beach Motel in Hampton, working hand in hand running the motel while taking care of their three sons. She loved to work; saying she never owned a bathrobe because she had no need of one; once awake, Inge was dressed and off to do some work. But Hank and Inge also loved to play. As their hard work grew their business, they were able to buy a second motel at Hampton Beach, build a home for themselves and, eventually, buy a vacation home and boat. They loved to travel and explore, and would frequently return to visit family in Germany. Inge kept meticulous and artful scrapbooks of all their travels. Tragedy struck when an arsonist destroyed their Hampton motel, forcing them to sell everything and return to work in their Hampton Beach property. But with a bit of grit and fortitude, they managed to get back on their feet and, eventually, retire to Florida-----with an RV, of course, so they could continue to explore the country they loved every winter and visit their children. Inge's creative eye showed itself in the details for her life: her gardens, the way she arranged her home, the way she dressed and fixed her hair, and, of course, the way she created her many beautiful scrapbooks of their trips. Horst, her loving husband of 60-plus years, predeceased her in 2016. She is survived by her three sons, Edgar Martinen of Richland, WA; Norman Martinen of Newton, NH; and Stuart Martinen of Rochester, NH; seven grandchildren, Matthew, Zachery, Jessica, Benjamin, Abbygale, Nicholas, and Victoria; and one great-grandchild, Henry. A Graveside Service will be held at 3 PM on Saturday, November 13, 2021 in the High Street Cemetery, Hampton. In lieu of flowers, donations may be made to St. Jude Children’s Research Hospital, 501 St. Jude Place, Memphis, TN 38105.

Durham - Ingeburg Petersen Martinen, 89, of Durham and a former longtime resident of Hampton, passed away peacefully on Sunday, November 7, 2021. She was born in the northern village of Ruellschau, Germany to Grete Detlefsen and Hans Petersen.... View Obituary & Service Information

The family of Ingeburg Martinen created this Life Tributes page to make it easy to share your memories.

Send flowers to the Martinen family.