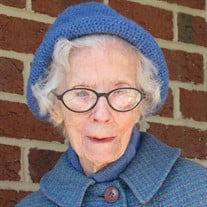 Portsmouth - Isabel Evelyn Grasso, 99, formerly of Hampton, passed away peacefully at the Clipper Harbor Rehabilitation Facility in Portsmouth. She was born in Boston, Massachusetts on April 10, 1916, to Mabel G. (Burrell) and Eugene M. Sweeney. Isabel lived in the Boston area through the fourth grade, and then moved to Littleton, New Hampshire with her mother, whose health necessitated living in clean mountain air. During her senior year in high school, Isabel’s mother died and so Isabel moved back to Boston. She attended Boston Teachers College (now UMass Boston) and graduated sixth in her class in June 1941. She double-majored in English and French and loved speaking French, whenever the opportunity arose, throughout her life. In January 1941, Isabel married James Vincent Grasso and this marriage continued until Jim’s death in April 1998. They had three children – Lynne in 1943, Nance in 1944, and Jim in 1947. They moved to several locations around the United States, dictated by Jim’s service in the U.S. Army and subsequent civilian career. Although Isabel’s dream was to teach French, at the time of her graduation married women were not allowed to teach in the Boston school system. She worked for several years at Draper Brothers in Canton, Massachusetts, and several more at the Mercedes Benz Corporate Headquarters in Montvale, New Jersey. She was an active volunteer at the Jenks Senior Center in Winchester, Massachusetts. Isabel and Jim retired to the Hampton area and she found her true home back in New Hampshire. She was a reporter and columnist for local Hampton newspapers for many years, until her retirement in her mid-80s. She was a member of the First Congregational Church in Hampton, and a volunteer and participant in the Hampton Meals on Wheels. She found great pleasure and support from her friends in these two groups. Isabel loved words – reading, writing, and playing Scrabble. She wrote hundreds of poems, many of which were published in local newspapers. Her work was included in “Before the Amen: Creative Resources for Worship“ and “The Mountains I Raise: A Garnering in Prose and Verse,” as well as other poetry collections. Isabel was dubbed Hampton’s “Unofficial Poetess-Laureate.” Isabel also loved cats, and had many of them throughout her lifetime. At one time she had seven cats, because one of her two cats had five kittens and each was loved and named as it was born, and certainly not given away! Her last and most loved cats were Tiger, and siblings Sequoia and Sebastian. But most of all, Isabel loved her children. She is survived by Lynne (Joel) Trussell of Durham, North Carolina, Nance (Frank) Hughes of Santa Barbara, California, and Jim (Lois) Grasso of Parker, Colorado. In addition, she is survived by two grandchildren – Teri Grasso (Brandon Kerns) of Denver, Colorado, and Brian (Claire) Karasek of Pittsboro, North Carolina – and three great-grandchildren – Logan, Liam, and Sadie Kerns of Denver, Colorado. Isabel also is survived by several nieces and their families, primarily in Massachusetts, North Carolina, and Texas, and one in Denmark. Visitation will be from 2:00 to 4:00 pm on Friday, April 8, 2016 in the Remick & Gendron Funeral Home - Crematory, 811 Lafayette Rd., Hampton. Isabel’s memorial service and celebration of her life will be held at 10:30 am on Saturday, April 9, at the First Congregational Church of Hampton, 127 Winnacunnet Rd., Hampton, followed by a luncheon at the church. Family and friends are respectfully invited. Burial will be private. In lieu of flowers, donations may be made to the First Congregational Church.

The family of Isabel Evelyn Grasso created this Life Tributes page to make it easy to share your memories.