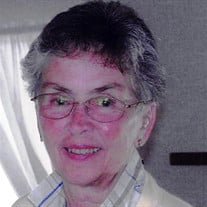 North Hampton – Jackquilyn S. “Jackie” Manix, 84, a lifelong resident of North Hampton, passed away peacefully surround by her children on Friday, January 25, 2019 at Webster at Rye. She was born in Portsmouth on June 2, 1934, a daughter of the late Earl and Dorothy (Riley) Spear. A graduate of Hampton Academy, she married her high school sweet heart and future husband of 54 years, the late Bill Manix who predeceased her in 2009. After raising her family, she worked a number of years at the former Busy Beaver Kindergarten and House of Travel. Jackie was a member of the Ladies Auxiliary of the North Hampton Fire Department, the Hampton Alumni Association and PASA. She enjoyed her monthly visits to the North Hampton fire station, Broadway shows, Winnacunnet High School sports and spending time with her family, especially her grand and great grandchildren. Surviving family members include her children, Debbie Nelson and husband Gary of Rochester; Edward Manix and his wife Pauline of Portsmouth and Anthony Manix of Hampton; grandchildren, Amanda, Jamie, Bob, and Jenn; great grandchildren, Torrin, Parker, Damien, Collin and several nieces and nephews. In addition to her parents and husband, she was predeceased by her sister Gwen Eames. Visiting Hours will be held from 3 – 7 PM on Friday, February 1, 2019 at the Remick & Gendron Funeral Home-Crematory, 811 Lafayette Road, Hampton. Services will be held at 10 AM on Saturday, February 2, 2019 in the funeral home. Burial will follow in the Center Cemetery, North Hampton. Relatives and friends are respectfully invited. In lieu of flowers, donations may be made to Friends of the No. Hampton Bandstand, Inc., PO Box 3, No. Hampton, NH 03862.

The family of Jackquilyn S. "Jackie" Manix created this Life Tributes page to make it easy to share your memories.

Send flowers to the Manix family.