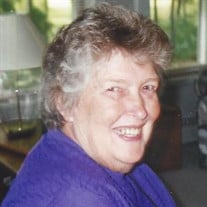 Hampton - Jacqueline Vivian Freeman, 85, of Hampton, passed away peacefully, Monday, September 18, 2017 surrounded by her loving children. Jackie was born in Exeter, October 19, 1931, the daughter of the late Russell and Doris (Yeaton) McWilliams. She was raised in Exeter, attended local schools, graduated from the former Robinson Female Seminary in Exeter and worked for many years as a floral designer in her family’s business, Dot’s Flower Shop. She married the late James Machelon Freeman in 1950 and resided in North Hampton for over 35 years where together they raised their six children. Jackie loved gardening, was an avid reader, volunteered in the community and was the happiest when spending time with her family. Left to cherish her memory, are her daughters, Pamela Rush of Hampton, Joyce Verville of Hampton, Brenda Lemoine and husband Keith of Exeter, Penny Jett and husband Brad of Hampton, Katie Levesque and husband Mike of Sisters, Oregon and Mary Freeman of Hampton. She also leaves behind her eight grand-children, six great-grand-children and many nieces and nephews. Relatives and friends may visit from 2 - 3:30 PM Saturday, September 23, 2017 at the Remick & Gendron Funeral Home-Crematory, 811 Lafayette Rd., Hampton immediately followed by a Celebration of Life Service at 3:30 PM. Burial will follow in the Center Cemetery, North Hampton. Memorial donations in her honor may be made to the NH SPCA PO Box 196 Stratham, NH 03885 or www.nhspca.org in memory of her loving companion dog, Buddy.

The family of Jacqueline V. Freeman created this Life Tributes page to make it easy to share your memories.

Send flowers to the Freeman family.