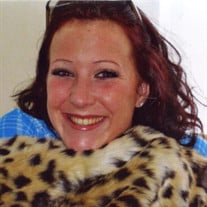 Melrose, MA – Jaime Leigh Marshall, 34, of Melrose, died March 26, 2016 at Lawrence General Hospital. She was born in Stoneham, April 27, 1981 the daughter Nancy L. Lightbown of Rye, NH and the late Kevin P. Marshall of Wakefield. Jaime was raised in Melrose and graduated from Melrose High School with the Class of 1999 and later attended Middlesex Community College. Jaime was an avid Boston Fan, the Patriots, the Bruins, the Celtics and she had a passion for the Red Sox. Jaime loved to cook, ice skate, skiing, the beach. Jaime was employed as a chef working in the hospitality business. In addition to her mother Nancy and her stepfather James Boyle of Rye she leaves two children, Dominic and Isabella and her brother, Johnathan Lightbown of Melrose and her maternal grandmother Jeanne Lightbown of Stoneham.. A prayer service will be held at 6 PM Tuesday, April 5, 2016 at the Remick & Gendron Funeral Home-Crematory, 811 Lafayette Road, Hampton, NH. Relatives and friends are respectfully invited. The family requests that flowers please be omitted. If desired, donations may be made to the, Saint Patrick School, 125 Austin Street, Portsmouth, NH 03801 in Jaime’s name.

The family of Jaime L. Marshall created this Life Tributes page to make it easy to share your memories.