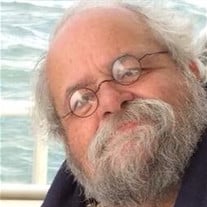 Newburyport – James “Jim” Baker, 68, of Newburyport, died suddenly Friday, February 9th from complications of the flu. He was born in Cambridge Mass, May 19th, 1949, the youngest of four siblings and the only son of the late Edna and Paul Baker. Jim graduated from Newman Preparatory school in 1967, a private high school in the Back Bay of Boston, and earned a golf scholarship to the University of Notre Dame. He finished his Bachelor’s Degree in World Studies in 1972 at Eisenhower College, a small, progressive school that supported creative thinking in Seneca Falls, NY. Although both he and Parkie attended Eisenhower and had many mutual friends, they actually never knew each other. It was after Parkie graduated that she serendipitously moved into the same apartment building where Jim was living in Boston. Parkie was his best friend, kindred spirit and love of his life. Jim loved Parkie, his “Lucy” who he could make laugh more than anyone else in the world (and as she would often say was his ‘saving grace’ during less funny times). He delighted in her insight and her passion for the world as well as her own humor. He shared her strong sense of social justice, feminism and helping those that needed a hand. They married in Boston in 1982 and enjoyed 36 years of marriage, creating a sense of community, fun and love for all who crossed their threshold. Jim was a cabinetmaker at Pine and Baker; the family company founded 75 years ago in Cambridge by Jim’s father and his uncle, Ted Baker. Both Jim and his cousin, Phil Baker worked at the ‘shop’ since they were young boys. Jim was an excellent craftsman but also an artist who honed his craft for 40 years restoring and custom designing wood products and furniture. His creativity flourished in the interior design of the home he shared with Parkie, evidenced by the beautiful pieces he created. His friends and family members also benefited from his wood working. One of Jim’s greatest joys was his daughter, Lily. Lily and her Papa shared a common sensibility, humor, and a wry intelligence that delighted him. They were each other’s comic relief and sophomoric soul mates. Often, Lily described him as her “out of the box father.” Many experiences, travels, shopping excursions, phone messages, texts, and family events revolved around Jim’s and Lily’s repartee, commenting on the world and each other. Their’s was a special and intimate routine like no other. Jim had an intuitive sense, making people laugh without intention. He was comfortable in the company of both men and women alike. With his Jerry Garcia looks, Jim was a man of witty comments and comebacks and he could tell a story like no one else. His stories were often self-deprecating or being the fool in a moment that was either embarrassing, hysterical or both. Jim was beloved in the community by local bank tellers, dry cleaners, store clerks and mechanics. His Saturday routines involved visits of connection and humor, not just business — no going through the bank drive-through for Jim. He was worshiped by a host of friends who had the privilege to learn from him and laugh with him. Jim was equally adept at telling a joke, offering satirical commentary or elaborating on a funny story. His wife and daughter were always his best audience. Jim was generous in spirit and practice. His home included his family, a menagerie of animals, and often stray people who needed respite and peace from their own lives or troubles. He held court at the kitchen island, drawing everybody in for good food, companionship and humor. Jim made everyone feel at home no matter the circumstance or position and made ordinary occasions special. He will be deeply missed by his family, his extended relatives and his hordes of friends and their children, all of whom have their own Jim Baker stories to share and remember. His upbringing and the attention of his older sisters shaped his frame of reference about life and honed his irreverent wit and sharp insight into the dark, absurd, and silly aspects of the world around him. Jim leaves his wife and best friend, Lee Parker “Parkie” Jones; his daughter, Lily and her husband Travis Bickford; his beloved, honorary sister, Mary McLaughlin; his nieces, nephews and grand nieces and nephews, as well as his beloved Corgi, Inky, his bewildered mutt, Eddy and his always underfoot cats. In addition to his parents, he was predeceased by his sisters, Mary, Pat and Fran. A remembrance party to celebrate Jim’s life filled with music will be announced at a later date.

The family of James P. "Jim" Baker created this Life Tributes page to make it easy to share your memories.

Send flowers to the Baker family.