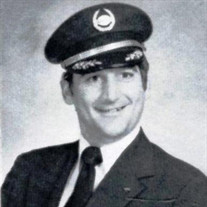 Hampton Falls - Captain James Robert "Bob" Casian, 74, passed away September 21, 2020, with family by his side at his home in Hampton Falls. Bob was born October 5, 1945 in Montreal, Canada, a son of the late William and Margaret (Crochetti) Casian. He developed a passion for flying at a very early age and obtained his private pilot license before learning to drive a car. Bob served in the Army Reserves for four years before starting his illustrious career with the airline industry. In 1967, be began his career flying with Allegheny Airlines and achieved captain status before moving with his family to Gibsonia, Pennsylvania to work as a flight simulator instructor. In 1997, after moving back to New Hampshire with his family, Bob flew internationally as a captain of the Airbus A330. On September 11, 2001, on a flight back from Rome, Italy, Bob's passenger plane was diverted to Gander, Newfoundland due to flight restrictions into the country. Bob entertained the tired and scared passengers with his notorious jokes for 48 hours before deplaning. Due to health issues, he retired from U.S. Airways in 2002 after achieving number eight in seniority for the company. After retiring from the airlines, Bob continued to support his family working as a security officer for the nuclear power plant, as a school bus driver, a ship-hand for tall ships in Boston, and as a bailiff for the New Hampshire Circuit Courts for a decade. His passion for flying brought him back to a career with airplanes working as a simulator instructor in Miami, Florida, a ground school instructor and flight instructor at Hampton Airfield, and Director of Operations for Air New England. Bob's interests included family, flying, flying, and more flying. He was a member of the Civil Air Patrol, Piscataqua Fish and Game, Aircraft Owners and Pilots Association, National Association of Flight Instructions, National Rifle Association, and member and President of the Port City Amateur "Ham" Radio Club. Bob was always there for his family and friends when they needed him the most. As a stable hand for Nicole's pony club, youth hockey coach for Robert's hockey team as well as refereeing hockey together, supporting Emilie at dance recitals and admiring her artwork, attending Patrice's cheerleading and shooting competitions, and encouraging her to pursue her career, and supporting Peter for many years as he competed as an athlete at the Special Olympics. Bob was extremely proud of all of his children and their accomplishments. Bob is survived by Renee (Biron) Casian, his wife of over 40 years, his five children and their spouses, Nicole and Jackson Crouse, Robert and Desiree Casian, Emilie and Alex May, Patrice and Joseph Touma, and Peter Casian; five grandchildren, Liam Casian, Dagny and Theodore Crouse, Campbell Casian, and Carmela Touma; his brother and wife, William Casian, Jr., and Eileen Casian; and many nieces and nephews. Bob's presence and humor will be sorely missed by all those that knew and loved him. In addition to his parents. Bob was predeceased by his sister, Barbara Casian. A Mass of Christian Burial will be celebrated at 11 AM on Saturday, September 26, 2020 at Our Lady of the Miraculous Medal Parish, 289 Lafayette Rd., Hampton, NH. Masks are required and social distancing must be maintained. If unable to attend, the Mass will be livestreamed, please visit the OLMM church website

Hampton Falls - Captain James Robert "Bob" Casian, 74, passed away September 21, 2020, with family by his side at his home in Hampton Falls. Bob was born October 5, 1945 in Montreal, Canada, a son of the late William and Margaret (Crochetti)... View Obituary & Service Information

The family of James Robert "Bob" Casian created this Life Tributes page to make it easy to share your memories.

Send flowers to the Casian family.