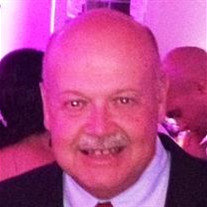 Seabrook – James Michael Cawley, Jr., 60, of Seabrook, passed away peacefully on Wednesday, April 18, 2018 at Massachusetts General Hospital surrounded by his loving and devoted family. Jim was born in Dorchester, MA on June 8, 1957, a son of James M. Cawley, Sr., of North Ft. Myers, FL and the late Marjorie (Kehoe) Cawley. Raised in Danvers, MA, Jim attended St Mary’s Annunciation, graduated from Danvers High School with the Class of 1976 and earned his degree at Northeastern Community College. Jim was a U.S. Air Force veteran with more than 20 years of service as a Security Police Officer where he started out as a K-9 officer and was activated during Operation Desert Storm in 1991 during the Gulf War. Jim furthered his law enforcement career at the Rowley, MA Police Department and continued for the next 26 years serving the Seabrook Police Department as a Patrolman and Detective and later as the Seabrook Dispatcher. After retiring from full-time service with the town in November, 2017, Jim remained on the department’s roster as a part-time patrolman. In his youth, he was an altar boy for St. Richards Parish in Danvers. Jim was a proud father of his boys, often sharing their many achievements. He enjoyed tennis, golf, boating, reading, riding his Harley Motorcycle and camping with his family, extended family and friends, visiting the same campground at Papoose Pond, also known as the “Pond,” one week every year for over 10 years. He loved to travel and enjoyed three weeks per year relaxing with his father at his North Fort Myers home. Jim loved the casino and playing Keno where he would often share his stories of how he almost won big, but lost by one number. In his backyard each Fourth of July, Jim hosted his neighborhood family with a massive block party that included DJs, caterers and 30 minutes’ worth of fireworks that lit up the entire sky. All who knew Jim remember how kind, generous and down to earth he was and how he would give the shirt off his back if needed, without complaint, and was also well-known as the man with the cigar and funny stories. Jim is survived by his sons, Justin and Kyle Cawley of Seabrook, his brother, Michael Cawley of Epping, his sisters, Donna Cawley and fiancé John Garrity of Newfields, NH , Jayne Paulsen and her husband, David of Charlotte, NC , Marjorie “Gigi” Miller and her fiancé Randy Davis of Bradford, MA, Jean St. Pierre and her husband, Stephen of Danvers, MA, his uncle Mark Kehoe and his wife Judy of Hanson, MA, his roommate “Bernie” who was considered like a sister and part of his family, of Seabrook, NH, brother-in law James Hannon, Jr of Middleton, MA, sister-in-law Barbara Seaman Cawley of Elliot, ME and his special friend of over 30 years, Elizabeth Russell Nelson along with his “special granddaughter” Emma of Seabrook, and many nieces, nephews, great nieces and great nephews. In addition to his mother, Jim was predeceased by his sister, Debbie Hannon. A walk-thru for law enforcement will be held from 9 to 10 am on Saturday, April 28, 2018 in the Remick & Gendron Funeral Home-Crematory, 811 Lafayette Road, Hampton. Public visiting hours will follow from 10 to 12 pm in the funeral home, followed by a graveside service with military honors in the Hillside Cemetery, Seabrook. All are respectfully invited. In lieu of flowers donations may be made to the Seabrook Rec Center, 311 Lafayette Rd., Seabrook, NH 03874. Please visit www.RemickGendron.com to view Jim’s memorial website, to sign his tribute wall or for directions.

The family of James Michael Cawley, Jr. created this Life Tributes page to make it easy to share your memories.

Send flowers to the Cawley, family.