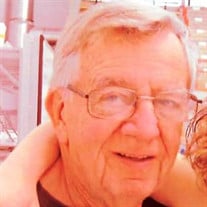 Hampton – James T. “Jim” Davies, 85, of Hampton, passed away peacefully, Wednesday, September 25, 2019 at his home with loving family by his side. He was born May 28, 1934 in Lawrence, MA one of seven children to the late James and Albertine (Beaudoin) Davies. Raised in Lawrence, he graduated from Lawrence Central Catholic High School and from Lowell Technical Institute with a degree in chemistry. Jim was employed as a chemist for the former Miliken Textiles and later Burlington Industries retiring in 1999. Family was the most important aspect of his life He shared 38 years of marriage with his beloved wife, Barbara (Travis) Stone-Davies. In addition to his wife he leaves three loving children, Carol Travers and her husband Thomas, Loretta Webster and her husband Peter, Alan Davies and his husband Joseph Davin, his beloved stepdaughter, Lauren Stone, 8 grandchildren, Janelle, Samantha, Ginsy, TJ, Joey, Sarah, Michael and Sophia. He also survived by 4 great grandchildren, nieces and nephews. In addition to his parents, he was predeceased by his son Eric Davies and stepchildren Lianne Tonry and Eric Stone. A visiting hour will be held from 9 to 10 A.M. Wednesday, October 2, 2019 at the Remick & Gendron Funeral Home-Crematory, 811 Lafayette Road, Hampton followed by a mass of Christian burial at 10:30 AM at St. Theresa Church, 815 Central Road, Rye Beach. Burial will be in the High Street Cemetery, Hampton. In lieu of traditional remembrances, donations may be made to the Alzheimers Association or by mail at 8180 Greensboro Drive, Suite 400, McLean, VA 22102.

The family of James T. Davies created this Life Tributes page to make it easy to share your memories.

Send flowers to the Davies family.