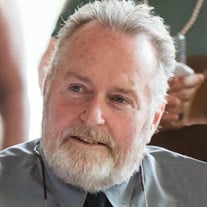 Exeter – James (Jay) K. McDonough, Sr., 64, of Exeter and a former longtime resident of Salem, NH, passed away peacefully on Wednesday, February 10, 2021 at Exeter Hospital. He was born in Lawrence, MA on October 10, 1956, a son of Shirley (Stevenson) McDonough of Wells, ME and the late Edward P. McDonough. Jay graduated from Salem High School in 1974. He played hockey for Salem High and also with local men’s leagues after graduation. Later in life, he was an avid golfer playing in leagues at the Breakfast Hill Golf Club in Greenland and he also played softball for the former Lupo’s Restaurant team for several years. He was a skilled carpenter and owned and operated McDonough Woodworking of Salem and Seabrook for many years. Jay had shared over 18 years with his loving companion, Jeannine Parker of Exeter. He could often be found socializing with his buddies at the North Beach Grill. Jay enjoyed traveling, watching football and spending time with his family. He was a caring father, a loving grandfather and a great friend. He will be sadly missed by all who knew and loved him. In addition to Jeannine and his mother, Shirley, James leaves his son, James McDonough Jr., and wife Kate Osterman of Woburn, MA and his daughters, Jennifer McDonough of Londonderry and Lexie McDonough of North Hampton. He is also survived by his grandchildren, Eleanor and Palmer McDonough and Aidan Fitzgerald; his brothers, Edward McDonough and wife Pam, and David McDonough, all of Wells, ME; his nephews, Matthew and Seamus McDonough; and his nieces, Katie and Stephanie McDonough. In addition to his father, Edward, Jay was predeceased by his nephew, Patrick McDonough. A celebration of life will be held at a future date. Please check back. In lieu of flowers, memorial donations may be made to Dana Farber Cancer Institute P.O. Box 849168, Boston, MA 02284-9168

The family of James "Jay" K. McDonough created this Life Tributes page to make it easy to share your memories.

Send flowers to the McDonough family.