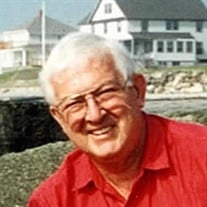 Rye – James Stephen Raynes “Jim / Jimmy”, 87, of Rye, died Monday, September 27, 2021, at his home with family by his side. He was born in Thetford, VT September 22, 1934 the youngest of six children to the late Charles O. and Nina A. (Coutermarsh) Raynes. He graduated from Hanover High School, Hanover, NH with the Class of 1953 and later attended Concord Business School in Concord, NH. He was a veteran of the US Army, where he served in post WWII SHAPE headquarters, Paris, France. Mr. Raynes was employed as an office manager in his earlier years in Dover, NH, Middleborough, MA and later for Peabody Gas & Electric in Peabody, MA. He served as a Gas & Electric Commissioner and Selectman for Town of Middleborough, MA. He retired from the National Passport Center in Newington, NH. Jim made his home in Rye the past 30 years where he served the Rye Conservation Commission for over 25 years and many as chairman. He also served on the Rockingham County Conservation Commission and the NH Association of Conservation Commissions. He was honored with the prestigious James Hayden Award. The award recognizes those that have made significant contributions in their communities or the greater region in natural resources conservation and planning. Jim’s involvement and achievements illustrate his lifelong commitment and work for conservation in greater NH. He also received the President’s Award from the NH Conservation Districts and last year was honored by Rye with the renaming of 56 acres in town “The Jim Raynes Forest”. He previously lived in Dover, NH, Middleborough and Peabody, MA. Jim was a 50-year member of the Masons, out of the Jewell Lodge in Suncook, NH. During that time, he served as a DeMolay leader. He was a Boy Scout leader for many years as all three of his boys enjoyed the scouting experience. In 1972 he was a Scout leader for his son Stephen’s Dover NH troop, when they did a 100-mile canoe trip that culminated at Great Bay. In 1981 he joined his sons Matthew and Charles on a weeklong High Adventure trip out of Seboomook ME. He shared 65 years of marriage with his wife Nancy (Gault) Raynes. In addition to his wife, he leaves two sons, Matthew Raynes and his wife Elizabeth of New Durham; Charles Raynes and his wife Catherine of Rye; four granddaughters, Brianna, Cassandra, Amanda and Skylar; great grandsons Stephen and Joshua, nieces and nephews. Jim was passionate about spending as much time possible with his family and loved telling endless “dad jokes”. He was predeceased by his son, Stephen, his parents and his five siblings. Special thanks from all the Raynes’ to Rockingham VNA & Hospice for their compassion over the last two years! A public celebration of his life will take place at 1P.M. Saturday,October 16, 2021 at The Goss Farm, Harbor Road, Rye, NH. In lieu of traditional remembrances donations may be made to Future In Sight

The family of James "Jim" S. Raynes created this Life Tributes page to make it easy to share your memories.