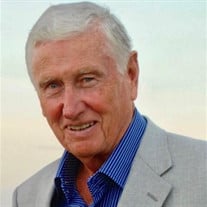 Rye - James E. “Bud” Kielley, 85, former Chairman and Chief Executive Officer of Towers, Perrin, Forster & Crosby (TPF&C), passed away on Saturday, July 29, 2017 in Portsmouth, just 27 days shy of his 86th birthday. He and his wife resided in Rye and Vero Beach, FL. Bud Kielley was born August 25, 1931 in Brooklyn, NY a son of the late James F. and Alice (Brady) Kielley. Growing up, Bud was an excellent student-athlete and with his 6’7” frame he stood out on the basketball court playing CYO and high school basketball. Bud was awarded a scholarship to play basketball for the College of the Holy Cross, in Worcester, MA and he often played on teams that were in contention for the NIT National Championship. His basketball coach at Holy Cross, Buster Sheary, said of him “Everyone knows how Bud has always been his best in our big games.” After graduating from Holy Cross in 1953, he went onto earn his law degree from Fordham University in New York, all while working during the day at Citibank’s Management Training Program. After completing the program, he went on to join TPF&C where he spent the rest of his career. In 1952, Bud met the love of his life, Patricia Grant, after playing at Madison Square Garden in an NIT basketball game. Bud & Pat met on St. Patrick’s Day and they both believed the luck of the Irish brought them together. They were married on June 18, 1955 and they were blessed to share 62 years of marriage. Together, they traveled the world on many adventures and made lifelong friends wherever they went. Bud lived a life that honored family, faith and fellowship with others. Mr. Kielley was a well respected and admired leader in the management consulting & reinsurance field. In a career that spanned over three decades with TPF&C, Bud was known as someone who lifted others up with his decency, integrity and humility. His guidance and vision of TPF&C laid the foundation for the multinational company known today as Willis, Towers & Watson, New York. After his retirement in 1991, Bud went on to become President of Sankaty Head Golf Club, Siasconset, Nantucket; John’s Island Club, Vero Beach, FL; and Vice President of Bent Pine Golf Club, Vero Beach, FL. In his personal and professional life, Bud truly respected and listened to people. He led by example and his word was his bond. There was nothing Bud loved more than to have the family come together in Nantucket, especially for a trio of celebrations during the third weekend in June that Bud affectionately called “The High Holy Days.” He cherished seeing the family joined to celebrate Pat’s birthday, Pat & Bud’s anniversary and Father’s Day. Pat & Bud called Nantucket home for over 37 years and some of their most treasured memories together are from the island. During his days in Nantucket, Bud loved playing golf with family and friends, he was a master at completing his New York Times crossword puzzles in pen, he loved taking his much loved dogs, Nanji & Alfie, for walks and he truly appreciated every Nantucket sunset with his wife, Pat. One of Bud’s greatest joys was his family. He is survived by his wife, Patricia Grant; his sister Catherine Kielley Kiffel, of St. James, NY; his children: James Kielley (Jackie), of Chester, NJ; Robert Kielley (Lindsay) of Bernardsville, NJ; Diane Kielley Dondero (James) of Salisbury, MA; Janet Kielley of Amesbury, MA; and his seven grandchildren: Jamie Dondero (Ali) of Boston, MA, Michael Dondero of Burlington, VT, Meaghan Kielley of Austin, TX, Sean Kielley of Boston, MA, Patricia Kielley of Chester, NJ, Grant Kielley of Bernardsville, NJ and John Kielley of Boston, MA. In addition to his parents, he was predeceased by his brother John Kielley. A mass of Christian burial will be celebrated at 10 AM on Friday, August 25, 2017, Bud’s birthday at St. Theresa Church, 815 Central Road, Rye Beach, NH 03870. The funeral mass will be performed by his fellow Holy Cross basketball teammate and alumnus, Reverend Earle Markey, Associate Director of Admissions at the College of Holy Cross. Interment will take place at a later date in Siasconset, Nantucket. In lieu of flowers, donations may be made to the American Heart Association, PO Box 417005, Boston, MA 02241 https://donatenow.heart.org/ or Spaulding Rehabilitation Hospital Network, 1575 Cambridge Street, Cambridge, MA 02138 https://giving.spauldingnetwork.org/donate.

The family of James E. "Bud" Kielley created this Life Tributes page to make it easy to share your memories.

Send flowers to the Kielley family.